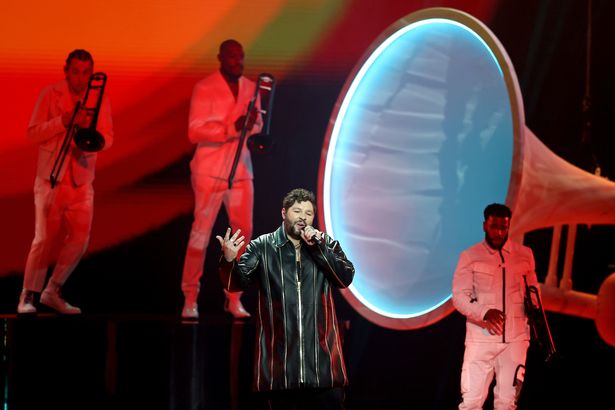 After a night of jaw-dropping performances, the winner of the 2021 Eurovision Song Contest was crowned and it was the glam rock of Italy’s Maneskin who triumphed.

When it came to the votes, it became a two horse race between France’s Barbara Privi and Italy’s Maneskin – with the rockers edging it to claim an emotional victory.

But it was a disappointing night for the UK’s entry James Newman, who finished BOTTOM of the 26 countries with the dreaded “nul points”.

Contestants rushed to hug James as it was revealed he had received no points at all in the public vote, but he raised his bottle of beer all the same.

Songwriter James had performed ninth on the running order, wearing an unusual zipped leather jacket for his performance of Embers – but it sadly did not burn brightly with viewers of the show across Europe.

The French entry, titled Voila which means “here”, had been the bookies’ favourite ahead of the final, and the simple yet stunning performance from Barbara Pravi struck a chord with both the judges and public votes.

But it was the rambunctious rock of Maneskin’s Zittie e Buoni that was to win the most votes in the combined public and judges’ votes.

The band’s lead singer said: “We just want to say to the whole world, rock and roll never dies”.

Earlier, fans had hailed it one of the greatest ever Eurovision Song Contests, with a wide variety of musical styles and memorable performances ranging from a fallen angel to a huge Russian doll.

The BBC’s host Graham Norton hailed it “one of the best grand finals we’ve seen in years.”

Click below for a full gallery of photos from the night:-

Graham paid emotional tribute to organisers of this year’s event in Rotterdam, saying: “To put it into context a year ago this venue was a hospital, and tonight, now it’s bringing us all together. I feel weepy now. But I do think it’s just lovely that people have gone not just the extra mile, the extra ten hundred mile to get this show on tonight.

“It’s extraordinary that coronavirus has only affected the Icelandic entry in the show and of course Duncan Lawrence the last winner of Eurovision he also can’t be here tonight.

“You did think is this going to be a house of cards? Is it all going to fall apart? But it hasn’t. They’ve put on an amazing show. The last few hours you might have forgotten what is going on in the world because it really has been exceptional. So congratulations to the Dutch team and our hosts here in Rotterdam.”

Malta’s Destiny had been one of the favourites and performed her song Je Me Casse to a rapturous reception, as did fellow favourite France with Barbara Pravi’s stuning solo performance of Voila.

Iceland’s Daði og Gagnamagnið were forced to isolate after one of the band tested positive for coronavirus – but they were still able to take part in the final remotely with a video of a pre-recorded rehearsal played on the night.

Their performance pf 10 Years saw the band all wear quirky matching knitwear stitched with their face’s on the front and three of the band’s curved keyboards were at one point connected into a stunning piano circle.

Standout performances included from Russia’s Manizha, who started her performance of Russian Woman in a full sized Russian doll outfit.

And Lithuania’s The Roop included an impress dance routine while all dressed in yellow to perform the song Discotheque.

We tried a Vimto flavoured cheesecake and were pleasantly surprised