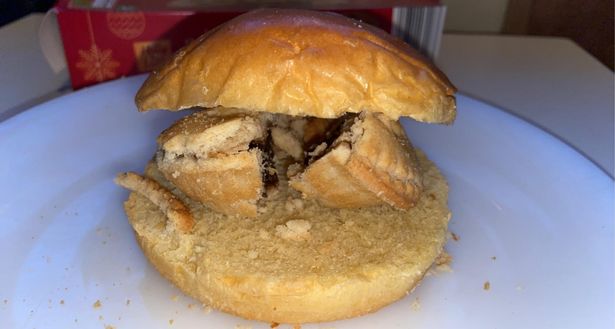 It started with a harmless tweet on Christmas Eve last year.

Iain Lindley wrote: “Ladies and gentlemen, I give you the Christmas Wigan Kebab: a mince pie on a brioche bun.

And because 2021 has been the year of progression and making weird choices, here I am exactly one year later – with a Christmas Wigan Kebab in my hands.

We’ve all heard of a Wigan Kebab – the ever-popular combination of a pie and barm – but the Christmas Wigan Kebab is a new thing to me.

And, apparently, it’s not really even a thing anyway according to its creator.

Iain told me: “It’s a year old social media gag. It was a one off.”

Giving me a bit more context, he said it was something he came up with friends.

“It was a Facebook joke amongst friends that got out of hand,” he explained.

“I’m sure I can’t be the first person to have thought of it.”

Despite this, my editor had already sold himself on the idea of me trekking to Aldi on a busy Christmas Eve afternoon to buy myself some brioche buns and mince pies and try them myself.

For anyone wondering, it’s a relatively easy recipe to follow: put the mince pie inside the brioche bun and eat. Job’s a good ‘un.

Despite its unusual combination, the festive kebab actually tasted pretty good. It was like a fruit cake donut, if you will.

The blend of crumbly mince pie with soft sweet brioche certainly made for a unique taste party in my mouth, but that’s pretty much Christmas in a nutshell really, isn’t it?

I debated whether to add butter or not, but decided to go in dry and try the ingredients as nature intended. Big mistake.

It turned out to be pretty dry and needed something to soak it up with. Maybe next time I’ll try it alongside a few sips of Bucks Fizz on the side.

If I have to give it a rating, I would go for a 3 out of 5. It was actually alright and harmless – there’s worse things I could have been made to put in my mouth so I shouldn’t complain.

With my 12-year-old nephew wondering what on earth I was doing, I forced him into tucking into the festive delight.

His verdict: “It tasted like fruit loaf.” Bish bash bosh.

At £1.58 for four brioche buns and six mince pies from Aldi, it’s also a steal of a treat.

Will I be having it again? Probably not. Will you be inspired to try it after reading this? Also, probably not.

And has Iain created a whole new thing for Wiganers to take pride and joy over at Christmas time? It’s looking quite doubtful at this point, but stranger things have happened in 2021.