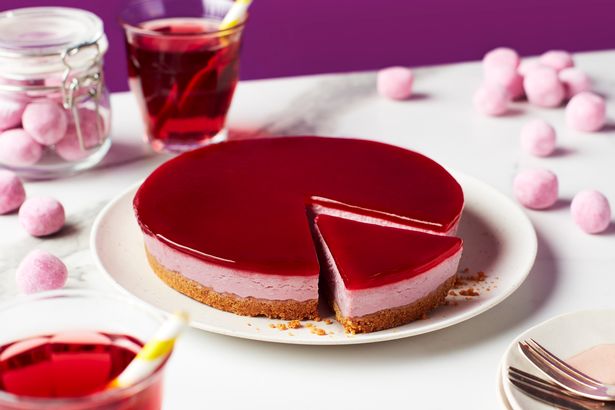 What do you get if you mix a cold glass of Vimto with one of the UK’s most popular desserts? A cheeky Vimto cheesecake of course.

This new release from supermarket Iceland has the classic bright purple colour of the juice drink, which forms a vibrant sheen on top of the cake.

It’s been made using Vimto’s secret recipe, first created by John Noel Nichols in Manchester in his office in Granby Road in 1908, when he started the company.

The well-loved cordial, originally called ‘Vimtonic’, is made from grapes, blackcurrants, and raspberries along with a secret blend of 23 fruit essences, herbs, and spices.

But how does it measure up in cheesecake form? One of the writers from our sister site 2Chill, put it to the test.

To start with, we have to talk about what it looks like.

The top layer is made up of a bright purple Vimto-flavoured glaze, which looks and feels slightly similar to the orange jelly layer of a Jaffa Cake.

While I like Vimto, I’m by no means a mega fan so wasn’t expecting to love the cheesecake but I was pleasantly surprised.

You can definitely taste the classic flavours of Vimto but it’s not overpowering.

If you didn’t know this was a Vimto cheesecake, it could easily be mistaken for something like a summer fruit or black forest gateaux dessert.

There is a good ratio of biscuit to the sweet creamy mixture and the combination of the two flavours and textures, along with the jelly-like sheen on top, creates a slightly unusual light, fruity and flavoursome cheesecake.

The top layer is a bit like a Vimto jelly, and I wouldn’t want to eat it on its own, but it works alongside the creamy cheesecake and biscuit base. The actual creamy cheese layer is impressive too.

It’s a baked cheesecake but almost tastes like a mousse and is very light. The biscuit base, however, is weighty and there’s definitely no shortage of digestives. It’s not crispy or light but slightly stodgy and heavy.

The thought of a Vimto cheesecake may not be appealing to some, even fans of the drink, but it works.

I’m a complete dessert-fiend and would always choose sweet instead of savoury options and was completely sold on this one.

I really enjoyed it and it’s perfect if you are after a fruity dessert, especially one with added nostalgia.

While it’s not the kind of thing you would find on a high-end restaurant’s menu, for a frozen dessert it’s a good choice and you can’t argue with the price.

Vimto has partnered with the British dessert producer Vittles Foods to create the new cheesecake.

Sally Bentley, Trading Manager for Iceland, said: “Vimto is a much-loved British brand, and we are thrilled to add this Vimto cheesecake to our collection of frozen desserts”.

The frozen cheesecake, which takes five hours to defrost before you can eat it, is on sale exclusively online and in UK stores of Iceland and Food Warehouse.

Love every second of your free time with 2chill

Wondering where to eat, drink or visit for your next UK holiday? At 2Chill we help you decide where to go and stay next with hundreds of recommendations right on your doorstep.

If you’d also like weekly inspiration and advice for your next trip, you can sign up to the Chill newsletter here.

It costs £3 for the 400g dessert. and comes in at 250 calories for a 80g serving, the size of a fifth of the cheesecake, although I would argue that most people would count a quarter or more as a slice as the entire cheesecake is small.

Iceland is well-renowned for frozen desserts, and this isn’t its first cheesecake-mash-up. It sold a Hot Cross Bun cheesecake for Easter followed by a Lotus Biscoff Ice Cream Cake at the start of the summer.

Have you visited a venue that offers unusual cheesecakes or other desserts? Be sure to register and leave a recommendation at 2Chill.