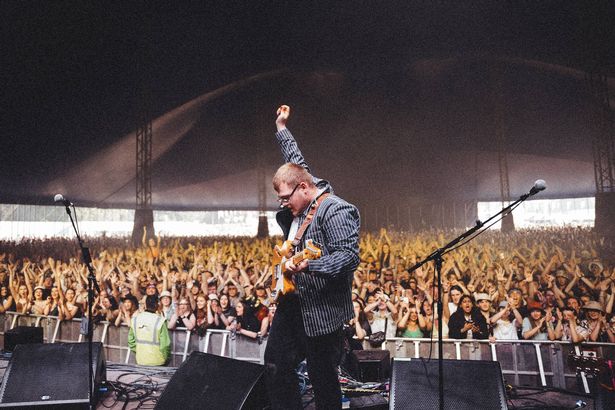 What a couple of weeks it has been for The Lathums.

Just 15 days after the Wigan four-piece’s debut album knocked Drake off the top of the charts, they played their biggest headline show to date – at a sold out Victoria Warehouse.

It has been a meteoric rise for the band who only formed in early 2019, after meeting at TMP College in Pemberton.

The band’s relative infancy made the gig on Saturday night (October 16) all the more impressive.

Fellow Wiganers The Stanleys and Scottish singer-songwriter Rianne Downey warmed the capacity crowd up before The Lathums triumphantly took to the stage.

Their walk-on song – ‘Caravan of Love by The Housemartins’ – helped create a joyful atmosphere in the venue, before the place started bouncing to set opener ‘Fight On”.

Libertines-inspired ‘I Won’t Lie’ followed before frontman Alex Moore screamed ‘Manchester!’ at those in attendance.

The band were ‘suited and booted for a special Manchester occasion’ in Alex’s words and The Smiths-esque guitars on ‘Oh My Love’ made it an early highlight in the set.

Alex’s stunning vocals are, without doubt, one of the most impressive things about The Lathums but the whole band are really tight and Scott Conception, in particular, proved himself as an incredibly talented young guitarist.

Predictably a large number of those in attendance were from Wigan and chants of the town’s name led Alex to gleefully reference Wigan Athletic’s derby win over Bolton Wanderers earlier in the day (which this particular Bolton supporting reviewer was less than thrilled by).

‘Great Escape’ followed and is a song that is already easy to imagine as a festival anthem.

Early song ‘This Place O’ Yours’ closed out the first section of the set and really showcased Alex’s beautiful singing voice.

The other band members then left the stage and allowed Alex to perform three songs acoustically.

He described album title track ‘How Beautiful Life Can Be’ as a song very special to him, having written it with his mum during lockdown.

Alex then invited the crowd to put the lights on their phones for ‘I’ll Never Forget The Time I Spent With You’, before wrapping up the short acoustic interlude with huge singalong to another early favourite in ‘All My Life’.

The crowd were in the palm of his hand during this section and the white lights bouncing off disco balls made for a mesmerising spectacle.

Returning to the stage as a full band, they played ‘Circles of Faith’ and then the unreleased but very catchy ‘Sad Face Baby’, which is sure to become a favourite.

‘I See Your Ghost’ closed off the main set with almost every single person in the crowd dancing to the track’s infectious ska-tinged sound.

After a couple of minutes, Alex returned to the stage to thank those watching ‘very very much’, before playing gorgeous album closer ‘The Redemption Of Sonic Beauty’.

Gold confetti was then blasted from cannons, before the band ended with the anthemic ‘Artificial Screens’.

It would have been hard to not leave Victoria Warehouse feeling joyful on Saturday night and the majority of those in attendance would have more than likely felt like they have witnessed something special from a burgeoning band.

This was The Lathums’ biggest headline show to date but there is no doubt that if they keep putting shows on like this, their stages will just get bigger and bigger.