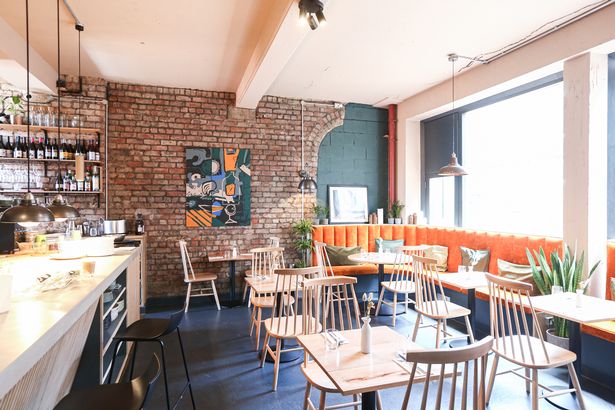 This year has been a pretty stunning year for restaurant and bar openings – despite battling gruelling economic conditions. Whether it’s high end dining experiences, small plates, BBQ or honest to goodness deep fried madness, more or less every base has been covered.

Even the locations have continued to inspire, with Victorian splendour, white-tiled industrial, underground architectural feats and 60s brutalism all represented in what has to be a landmark year in Manchester hospitality.

Winner of the Best New Restaurant at this year’s Manchester Food and Drink Festival awards, this small but flawless spot perched above Deansgate doesn’t make a fuss about what it does. No brash social media, no hype. Just spectacular food executed by some of the most knowledgeable chefs and front-of-house folk in the city. And though the plates may look like works of art, the substance is there in abundance too.

Breathing new life into the home of Manchester’s long neglected Natural History Museum, Exhibition has summoned some of the best operators in the city and beyond to fill this storied building with brilliant food. There is Ramsbottom-born Baratxuri, bringing its excellent tapas, Caroline Martins with her Sao Paulo Bistro and the excellent Osma from Prestwich, coming together as something of a dream team, while the weekends find the space opened up for drinks and dancing.

Aiming to be a New York-style neighbourhood restaurant with great drinks and snackable BBQ Thai food, Neon Tiger is a fine addition to the burgeoning number of spots opening off Deansgate. Opening back in the summer, it’s got excellent cocktails, a solid range of local craft beers and some future classic dishes on the menu, such as its wildly spicy lemongrass and turmeric sausages and sweet soy pork skewers.

Labour of love doesn’t quite do this place justice. Reclaiming the old railway station house in Levenshulme from rack and ruin, a group of community minded locals took it upon themselves to save the building, and have turned it into a fabulous neighbourhood spot that is mildly obsessed with cycling (it straddles the Fallowfield Loop cycleway and has a bike shop attached). Hurl in great coffee, great pastries, Sunday roasts and DJs on a weekend, and this is the kind of fabulous local place anyone would love to have on the doorstep.

Chef-patron Mike Shaw’s hugely ambitious new venture Musu boasts a range of wild menus encompassing all facets of Japanese cuisine. So this means you can either immerse yourself in a full-on tasting experience, head in for its classy lunch menu or pop by for some late night sushi or a Japanese toasted milk bread sando (the kitchen is open and serving up to 1am). Either way, it’s an extraordinarily classy spot, complete with breathtaking, state-of-the-art video walls and, come the evening, clubby vibes.

Despite opening up in lockdown, Schofield’s Bar, at the back of Deansgate, managed to cement itself as perhaps the best cocktail bar in the whole city, thanks to its intimate surroundings, classy drinks and even classier service. So a lot was riding on Sterling, its new venture in the basement of the Stock Exchange Hotel. It was always going to be great though, and it is, from the sumptuous interior to the spectacular cocktail and wine list. Throw in some snacks from the kitchen upstairs, and brothers Joe and Dan Schofield have done it again.

When you’ve worked for the likes of Gordon Ramsay, opening your own cocktail joint must be a walk in the park. Seasoned barman and operations manager Dan Berger’s Blinker threw open the doors of his place in May, and it’s recently been named among the top 50 bars in the country, so he’s evidently doing something very right. In a lovely corner spot on Spring Gardens, Blinker combines traditional classics with a bit of a twist, and makes it all look effortless.

Boasting one of the best views in town, Climat is the rooftop restaurant found perched at the top of Blackfriars House, and was conceived by the folk behind Covino in Chester, recommended in the Michelin Guide. The place has a dazzling wine list (and a hugely knowledgeable staff to guide you through it) and some of the best small plates in town, from spiced lamb faggots, and beef fat hash browns, to vibrant salads and seafood.

Pollen has come a long way since it started selling its Viennoiserie and sourdough from an arch underneath the rumbling trains heading in and out of Piccadilly. Its first cafe on Islington Marina proved it was much more than just a bakery, and now it’s got another fantastic outlet for its hospitality skills at Kampus, a hop and a skip from where it all started. Stylish and quietly world class.

Salt & Pepper became an absolute sensation from its stall in the Arndale food market, with queues and general pandemonium occurring on a daily basis. But after it became a victim of its own wild success (involving a hefty bill for new extraction to cope with the demand), sibling owners Chloe and Cash bagged themselves a new place to live on High Street in the Northern Quarter, and it’s going gangbusters with its exceptional British-Chinese fusion, taking in everything from classic chips and curry sauce to crispy sweet and sour prawns done proper.

Once the Co-op’s own dedicated concert hall, and the scene of shows from Jimi Hendrix to Tina Turner, New Century has been reinvented. It now has a stunning live venue upstairs – programmed by the very cool folk behind Yes and Now Wave – a music production school in the basement and a beautifully-designed food hall and bar occupying the ground floor. You can take in great pizza from Ply, vegan Vietnamese from Banh Vi, superb burgers, steaks and Sunday roasts courtesy of Tallow, sushi from Zumuku, steamed boa delights from BaoBros23. New Century has everything, really.

The flagship Lily’s in Ashton has long been a place to celebrate the very, very best in Indian vegetarian food. They opened a new deli unit in Chorlton last year, and then earlier this year a second on in Ancoats. Now the residents of the city’s hippest neighbourhood can get their hands on fresh chaats made on the premises, samosas for days, bhel puris, spectacular daily curries and a grocery section so very comprehensive it would give Madhur Jaffrey palpitations.

A collaboration between the minds behind Belzan in Liverpool and RIchard Turner, one of those behind both Hawksmoor and Pitt Cue in London, Carnival is a true haven for fans of the four-legged. Porterhouses, rib-eyes, rumps, whole prime ribs, this is truly a celebration of carnivorousness in all its forms, while its Sunday roast is slowly becoming the stuff of legend, with 34 day-aged beef, Italian style porchetta and, for the veggies, a fabulous Mrs Kirkham’s cheese and onion pie taking centre stage.

Found at the foot of the huge skyscrapers at the bottom of Deansgate, this achingly good looking izakaya spot (let’s call it Japanese tapas, shall we?) delivers on both style and substance. Try wagyu rump or barbary duck breast with plumb from its robata grill, or explore the expanse of sushi, sashimi or tempura, while also diving into its impressive cocktail list, topped by its signature champagne pina colada.

Another import from Liverpool, Paris-via-the-Middle-East inspired Maray opened its beautiful room over the summer, and has been excelling itself ever since. It’s not just about the ‘disco cauliflower’ – the signature dish of a while cauliflower head baked in yoghurt and spices – but dishes like the pork cheeks with tahini and a dazzling lamb shawarma. The Sunday roast too is also one of the very best in town.

Just in under the wire, The Jane Eyre’s new bar on Beech Road in Chorlton has already proved a stone cold hit in the couple of weeks that it’s been open. Taking on the unit which was refurbished by Wilmslow’s Suburban Green (prior to that it was The Parlour), brothers Joe and Jonny Eyre, with chef Jack Mullen and manager Frank Burke, are poised to breathe new life into this most excellent neighbourhood spot.

When Legoland, soft play and other indoor attractions are reopening