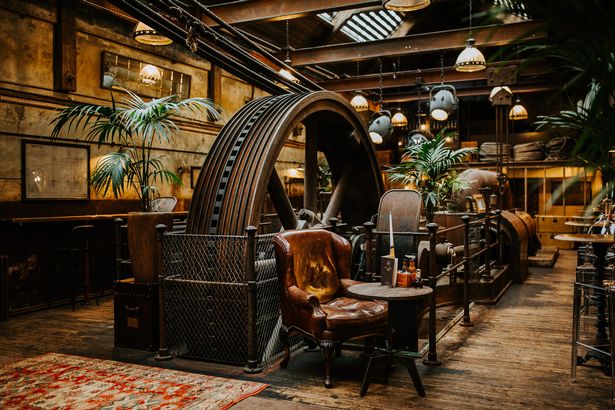 This is the extraordinary beer hall that boasts the longest pub bar in the north, with 42 hand pulled beers as well as 40 keg lines too.

The Bowland Beer Hall is based inside a huge 19th century converted weaving mill in Clitheroe, Lancashire.

And rather handily for those partaking of a pint or two, it is just a few minutes walk from the main line train station in the pretty market town.

READ MORE : Inside the historic Salford pub the Black Friar after its £1.4m transformation and emergency repair job

The beer hall is part of the extensive multi-million pound redevelopment of the derelict Holmes Mill over the past six years.

It not only boasts that huge 105-foot oval bar, but you can also sit in the old mill’s engine room next to the original engine that powered the weaving sheds.

The mill is not only home to a beer hall, but also a food hall serving artisan local produce, an ice cream parlour, a 39-bedroom hotel (where you can book a “beercation”), offices and even a four-screen Everyman Cinema inside.

Just to complete the dazzling offer, they’re also just putting the finishing touches to a GIN distillery and bistro on the site too which will launch later this summer.

Warren Bennett, commercial director of the James Places group who owns the complex, says: “We’ve spent an awful lot of time and energy on it, it’s a significant site in the town centre, and it had been derelict for more than ten years before we took it on.

“We’ve spent around £10m on the site, and it’s really bearing fruit now.

“There are now more people employed on the site than when it was a weaving shed. It had 200 staff when fully functioning weaving mill and now well over 200 people are employed here.”

Being so close to the train station in the market town has further added to the appeal of the mill, which dates back to 1823, and the beer hall as a destination venue.

Trains run to Clitheroe every hour from Manchester Victoria through Salford, Bolton and Blackburn.

Warren says: “We get an awful lot of visitors from Manchester and Bolton, a lot of people on the ale trail, and we’re expecting that to increase when they start the new faster train route here.

“Because of being so close to the train station, it’s around a 15 minute walk, it just opens us up to a much bigger customer base.

“We like to think we’ve given people a real reason for travelling here.

The beer hall stocks Bowland Brewery’s own core range of six beers as well as a rotation from various producers from across the North West on the 42 hand pulls, with a wide selection of ales and ciders on the 40 keg lines too.

Warren says: “Since opening the beer hall six years ago we’ve been busy since the word go, it’s been extremely successful due to the size of the place.

“We are very much a seven day a week trading venue, and most people visit in the day, they come for late lunch or early evening. We’re not necessarily chasing that Saturday night crowd.”

In the glorious summer sunshine they are also able to make use of 400 covers in their courtyard area.

And as for that huge bar? Well they made sure it was 105 feet when they were building the venue after checking the previous record for longest bar!

Warren laughs: “The owner James designed the bar, he’s very much a designer, and when we were putting all the pipes into the cellar James rang me up to say we need to extend the bar by another couple of metres.

“He said if we make it just a little bit longer we can make it the longest bar in the UK.

“He realised we were only a couple of metres short so the guys extended it!”

There is no official Guinness World record for the title of longest bar in the UK, and Warren notes that since they opened, Tottenham Hotspur Stadium launched its new ground in 2019 with a bar that runs the full length of its pitch at a ginormous 65 metres.

But Warren says: “We are still the longest continuous public bar in Britain as far as we know, and certainly longest in the north.”

Even with the interruptions of lockdowns, this year the James Places Group, run by local entrepreneur James Warburton, has recorded an increase in sales.

Warren says: “It’s been like turning a tap on for us – as soon as we’ve been able to trade, we’ve done extremely well. We’re 25% up on like for like sales across the group.

“What we’ve certainly found is that market towns have been doing extremely well in terms of recovery as it’s felt to be a safer, more comfortable environment and if you’re going to go out you’re more likely to go somewhere nice and perhaps go a little further to do that.”

The easing of lockdown restrictions has also meant a huge boom in weddings being booked – with 200 already booked in at the mill, which also offers a 200-capacity events room, while “beercations” are a popular option at the site’s hotel.

Warren laughs: “It’s not unusual to see a bride walking around with a pint of real ale in here.”