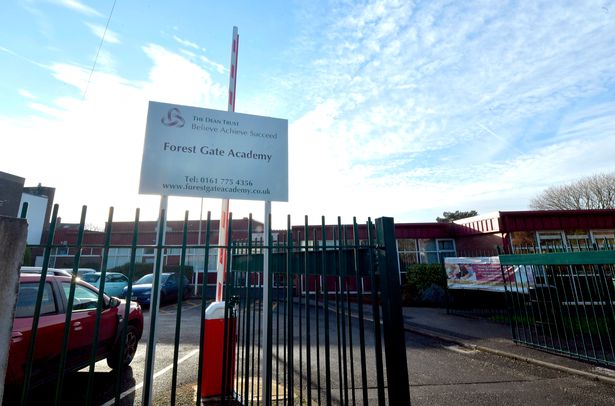 A primary school which was refusing to let pupils attend without proof of a negative Covid test has backed down.

We reported earlier how parents had criticised Forest Gate Academy, in Partington, Trafford, for ordering pupils deemed as close contacts of a positive case to show their test on arrival each day.

Without it they would be turned away from class and parents told us families who didn’t want to test their children were being forced to keep them at home.

However, the school’s rule – which was also being applied at nearby Partington Central Academy, also part of The Dean Trust – was at odds with the guidance issued by the government.

While it’s the case that schools can request that tests be done, it is only advisory and the Department for Education has confirmed that its guidance states ‘testing remains voluntary but is strongly encouraged’.

Today both schools, which share the same executive headteacher Anita Edwards, have written to parents to say the testing will no longer be enforced.

“We will continue to strongly advise parents to continue with LFT testing on entry to school (if your class has been notified),” the message said. “But this is now voluntary and not a requirement to enter school.”

One parent told us the school should never have been allowed to ‘make up its own rule’ in the first place.

“I’m pleased they have seen sense and decided to follow the proper rules, which should have been followed from the start,” she said.

“There have been a lot of unhappy kids walking away because they had no test in hand as they had forgotten or not done them.”

Parents with children at Forest Gate had earlier criticised the school, saying their children were on their second week of doing daily tests.

“I’m so mad about it, a lot of parents aren’t taking the children in,” said one mum. “My youngest is five and he’s had to test every day since last Tuesday and as more have tested positive it’s now been extended till this Saturday.

“You have to take the test to the class to show it’s negative. Unless you show the school a negative lateral flow test they will not let you in, it’s ridiculous.”

In the message to parents, the schools say they ‘continue to have a very high number of cases’ and ‘would like to continue to protect our community as best we can’.

A spokesperson for the DfE said its latest guidance for schools makes it clear that ‘testing remains voluntary’.

“Secondary schools should also retain a small asymptomatic testing site (ATS) on-site until further notice so they can offer testing to pupils who are unable to test themselves at home.

“Schools are strongly encouraged to ask parents and other visitors to take a lateral flow device (LFD) test before entering the school. Further information on Daily Rapid Testing can be found in the Tracing close contacts and isolation section.

“There is no need for primary age pupils (those in year 6 and below) to regularly test, unless they have been identified as a contact for someone who has tested positive for Covid-19 and therefore advised to take lateral flow tests every day for seven days.”

The M.E.N has approached the schools for a comment.

Has there been much disruption at your child’s school? Are you being asked to show proof a negative test? Let us know in the comments here.

Review: Everybody’s Talking About Jamie at The Lowry

Best restaurants in Manchester for American style food and vibe