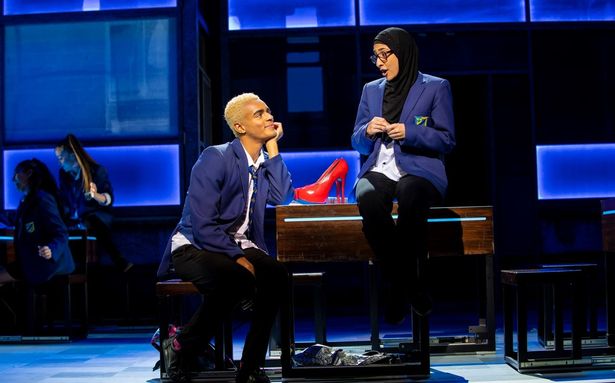 When you’re offered the chance to see one of the most exciting and critically acclaimed shows in theatre, you don’t say no.

Especially when it also promises a rare glimpse of Shane Ritchie in drag.

Based on the 2011 television documentary ‘Jamie: Drag Queen at 16’, ‘Everybody’s Talking About Jamie’ follows a 16-year-old boy as he ‘steps out of the darkness’ and discovers the world of drag.

Read more: ‘I love being queer and telling queer stories’: Bury’s Layton Williams on starring in Everybody’s Talking About Jamie

The show comes to the Lowry theatre for the first time since its debut in Sheffield and the West End and also happens to be the first stop on what will be a tour across the UK.

Layton Williams, who made his theatre debut as Billy Elliot in 2007, takes on the lead role of Jamie New and the Bury -born star makes a stand-out impression on audiences the moment he glances on stage.

Set in Sheffield, the show brings a Northern twang to proceedings and will relate to any person who’s ever felt ostracised or singled out in the early years of their life.

The show also stars Amy Ellen Richardson, Shobna Gulati, George Sampson, Sharan Phull, and, as mentioned earlier, Shane Ritchie in a role that’s a step away from his EastEnders days.

Appearing in the role of Hugo, later Loco Chanelle, Ritchie’s character becomes a mentor-of-sorts for Jamie as he’s thrown into the dazzling spotlight of drag.

Without teasing too much, Ritchie absolutely impresses in the role and is a much-welcome addition to the cast.

Besides Williams, it’s Gulati, Phull and Richardson who perhaps make the most lasting impressions on audiences.

Serving as the witty sidekick, Dinnerladies and Coronation Street star Gulati shows why she has reprised the character for the upcoming film adaptation.

Serving much-needed quick comebacks and comic relief, Ray is a big hit with audiences, as is Richardson’s portrayal of Jamie’s mum Margaret.

There’s a number in the second act that will absolutely break your heart and put Jamie’s relationship with his mother into perspective.

Speaking of Jamie, Williams absolutely nails every aspect of the titular role. He’s dazzling, charismatic, energetic and, most of all, just sheer fun.

He’s such a joy to watch and just owns every aspect of the character – bringing the depth and sass when needed.

If you’re coming into the show fresh, get ready to have the show’s many earworms embedded into your brain as you walk out of the auditorium.

But, most of all, be prepared to think twice about the way we treat each other.

At the crux, the show is about defining the odds, making it out the other end, and showing that who you are is not defined by how other people see you.

It’s a joyous night of fun, songs and laughs that will also leave a lasting impression on you that we can be whoever we want to be if we can only fight above what others think of us…. And you don’t even know it!

Everybody’s Talking About Jamie runs at The Lowry until September 12. Tickets here.

Sign up to the MEN email newsletters to get the latest on sport, news, what’s on and more by following this link.

Are people allowed to travel to and out of Wales from Monday?

‘Phenomenal’: Gary Usher and the city’s restaurant bosses gearing up to re-open