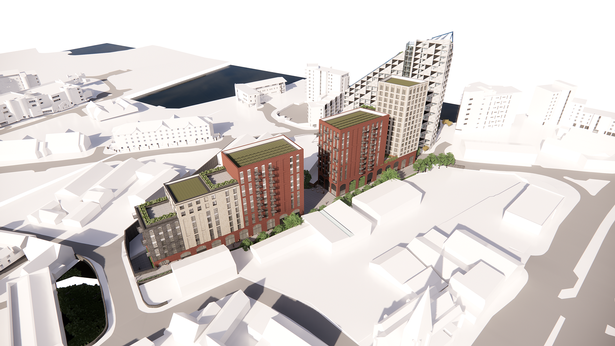 Plans are being worked on which would see £118million spent on building multiple apartment blocks on land next to Plymouth’s waterfront.

The company that owns Sutton Harbour wants to construct six blocks of flats at a cost of £50millon on industrial land next to where it also aims to construct what would be one of Plymouth’s tallest skyscrapers.

Waterfront regeneration specialist and real estate developer Sutton Harbour Group (SHG) Plc has unveiled a scheme to create a “new neighbourhood” on land to the east of the harbour, and link it to the waterfront via a footbridge.

AIM-listed SHG is preparing detailed proposals to comprehensively redevelop the sites in sequence and deliver a residential-driven mixed-use development.

A new “residential quarter” with a combined construction value of more than £50million would be created on land between Sutton Road and St John’s Bridge, connected by a walkway leading directly to the waterfront and the company’s previously approved £60million Sugar Quay tower of waterside apartments, shops and restaurants.

The land is currently used by industrial and commercial businesses, with warehouse buildings and open storage yards, which SHG is in discussions about buying.

The plans, if approved, would see the plot turned into a residential accommodation in two complexes, each of three blocks of flats, around a large public square.

There will also be shops and car parking, and it is intended the scheme would feature affordable housing and social housing at St John’s Bridge, alongside open market apartments.

Meanwhile, plans for the 20-storey Sugar Quay skyscraper, granted full planning permission in December 2018, will be the subject of a new application, revised to relocate a planned basement car park to facilities included in the development at St John’s Bridge.

The schemes, if approved, will collectively create an estimated 145 full time jobs during a construction period of about 7.5 continuous years.

The combined plans represent an overall investment by SHG of more than £118million across the three developments during the construction phase, delivering about 380 apartments divided among the three clusters, alongside a range of retail and leisure uses.

The St John’s complex will be affordable housing including some social housing, offering more than 100 new homes. This £25million complex is of stepped height of five, seven and nine storeys,

Sugar Quay would be developed after St John’s Bridge is finished. This development will be

consistent with the previously approved planning application which remains unchanged,

other than to relocate the planned basement car parking provision to the St John’s Bridge site.

This would greatly reduce disturbance for neighbours during the construction period, SHG said, and enable this previously approved project to proceed by avoiding insoluble problems of leakage in the originally planned basement car park.

Car parking spaces for residents would also be included in the approved extension to Harbour Car Park, along with some parking required for the adjacent office building, all as previously approved.

The new application also features enhancements to Marrowbone Slip in removing the garage ramp access, and an updated energy strategy for the building, consistent with new standards.

Sugar Quay would be a staggered-height building created in a distinctive T-shape with seven to 19 storeys of 170 apartments and a ground floor with 30,000sq ft of commercial space for retail and restaurant units bordering an enhanced urban realm.

The Sutton Road East complex would be developed immediately upon the site becoming available for vacant possession.

The £25million complex will feature about 110 residential units within three distinct buildings, of five, nine and 15 storeys. The complex will also include car parking and “retail grade” units which will “enliven East Sutton Road and the pedestrian areas at grade within the complex”, and further enhancements to the east-west walkway.

The ambitious schemes present what SHG described as “a unique opportunity to deliver regeneration to this site”, identified by Plymouth City Council as a strategically important location for development.

The buildings will collectively provide social housing, affordable housing, and a range of prices for market housing to “the more affluent households in Plymouth”. SHG said this would result in a “diversified and urbane community” in the heart of the city.

Buildings have been designed by Plymouth architects AWW to have a distinct character drawing upon the site’s industrial railway heritage. Brick would be used as the predominant material to echo a warehouse typology, along with brick arch details and suspended metal balconies.

SHG has been in pre-application discussions with the council’s planning team since November 2019, and is now preparing to submit three full planning applications by the end of the summer.

The applications will be further informed by feedback received from a community consultation. A virtual exhibition will be hosted online from August 6 and run for two weeks, to enable people to view the proposals, ask questions of the project team and share their thoughts and comments on the plans. This exhibition, being held online owing to the restrictions on public events due to COVID-19, is available to view here.

Philip Beinhaker, executive chairman of SHG, said: “Sutton Harbour Group’s renewed commitment to developing the east side of Sutton Harbour with the creation of Sugar Quay offers the perfect opportunity to reinvigorate development on this strategically important site through the creation of the Sutton Road East neighbourhood, and will help to better connect the East End communities with the centre of Plymouth and the vitality and range of activities at Sutton Harbour.

“Sugar Quay will be a striking waterfront development to unlock the huge potential of this long underused site, and the adjacent developments at Sutton Road East and St John’s Bridge will link to, and complement, the scheme, helping to integrate Plymouth’s waterfront and city centre with the surrounding community.

“Sutton Harbour Group is a willing partner supporting Plymouth City Council’s policies for regeneration and the proposals contribute to the council’s wider objectives, boosting sustainable pedestrian links for residents, and realising long-held ambitions by the city for regeneration and reinvigoration of this area of Plymouth.

“SHG wishes to continue its positive and constructive relationship with Plymouth City Council and the local community by bringing forward these exciting proposals with their involvement and support, in order to deliver meaningful change to this part of the city.

How many people in Wales have been furloughed