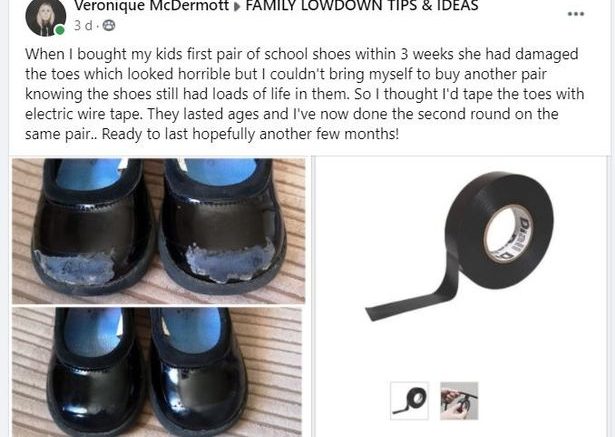 A mum’s 89p hack for saving her daughter’s school shoes has gone viral.

When five-year-old Brooke’s school shoes were scuffed at the front after just three weeks in school, mum Veronique McDermott was understandably reluctant to buy a new pair.

So after trying to cover the scuff marks with nail polish and Sharpie pen, she decided to try some electric tape – and has never looked back.

It lasted months and was so successful that she’s doing the same thing again – to get even longer out of the same pair of £12 shoes.

Sharing the idea on the Family Lockdown Tips & Ideas Facebook page, which was recently renamed Family Lowdown, she said: “When I bought my kid’s first pair of school shoes within three weeks she had damaged the toes which looked horrible but I couldn’t bring myself to buy another pair knowing the shoes still had loads of life in them.

“So I thought I’d tape the toes with electric wire tape. They lasted ages and I’ve now done the second round on the same pair.. Ready to last hopefully another few months!”

Hundreds of parents have been reacting to Veronique’s post, raving about her ‘incredible idea’.

“Game changer,” said one mum, while another added: “I’m on my third now at school and this is actual genius lol!! So simple and I’ve never thought to do this! Thank you lol! X”

The mum-of-one told the M.E.N’s Manchester Family that ‘not a single person has noticed the shoe repair’ and when she’d pointed it out to them ‘they’re all shocked at how it appears to be the original bought shoes’.

“I was disgusted with the idea of throwing away nearly new shoes and thought of loads of different ways to rescue them,” she said. “I tried nail polish and Sharpie and it didn’t last or looked really obvious. I saw the tape and thought to try it and it looked amazing.

“When my friend asked if I could do the same with her daughters shoes I realised other mums might find it useful. So I shared on the group not expecting such a huge response.”