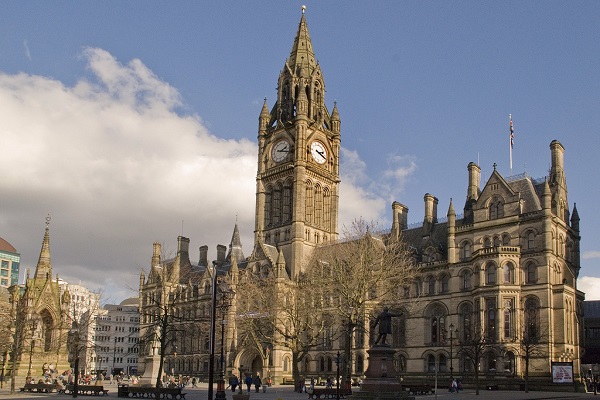 The town hall was built because the neo-classical town hall in King Street had become too small to house the expanding business of the corporation. A competition was held and won by Alfred Waterhouse (1830-1905), mainly for his ingenious planning. The site was an irregular triangle on which had to be fitted a large hall, a suite of reception rooms and living quarters for the Lord Mayor, as well as offices for all the corporation departments and a chamber for council meetings. Waterhouse successfully combined the ceremonial and workaday requirements.

The Town Hall was designed in the thirteenth century Gothic style but it was, in Waterhouse's words, a building "essentially of the nineteenth century." It incorporated innovations such as a warm air heating system. The structure comprises fourteen million bricks encased in Spinkwell stone.

Centrally placed is the imposing 280 foot high clock tower. The clock mechanism was made by Gillet and Bland, and was started on New Year's Day 1879. The inscription on the three clock faces which are visible from Albert Square reads "Teach us to number our Days." There are 24 bells in the tower; the Great Hour Bell weighs 8 ton and 2 cwt and is called Great Abel, named after Abel Heywood, the Mayor at the time of the official opening. He laid the pinnacle stone of the spire on 4 December 1875. The formal opening ceremony took place on 13 September 1877.