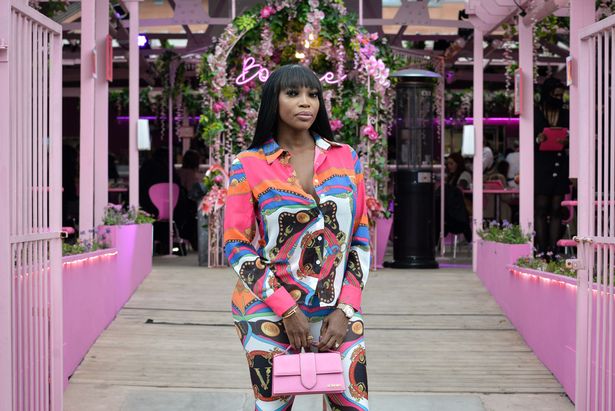 It’s mid-afternoon in Manchester, and at the newly opened Terrace by Boujee the champagne and cocktails are flowing in the spring sunshine.

Women are dressed to the nines, sparklers fizz out of bottles of Laurent Perrier, and everyone is wanting a selfie with the Boujee queen herself Lystra Adams.

Lystra is The Real Housewives of Cheshire ‘s newest star, who joined the hit docudrama for the first time last year after moving to the Golden Triangle to launch her business ventures.

Now she’s aiming to bring her brand of OTT luxury to life here in Manchester – with the opening of the outdoor Terrace by Boujee on Bridge Street, followed by a vast new Boujee restaurant right next door, in the site formerly occupied by nightclub Vanitas.

For Lystra has big plans for her Boujee brand – which has been taking Liverpool by storm since she launched the restaurant there at a huge site at Liverpool One back in December.

Surveying her Manchester site, Lystra smiles: “I’m quite loud, and pink is my favourite colour so I just wanted to make this Lystra you know?

“I love to eat out and the first thing I do when I go out is take selfies and videos – everyone loves to do that and put it on Instagram.

“It’s about a fun feel, the good vibes, with great food and drinks, it has to all go hand in hand that’s very important to me.

“Why not create a restaurant that is Instagrammable? That’s exactly what it is.”

The Bridge Street site may be familiar to revellers as it had initially been launched in the city last July by the team from 202 Kitchen as a temporary ‘pop up’, which featured as Lystra’s introductory scenes in the Real Housewives of Cheshire.

It proved such a hit with the city’s revellers that the owners of 202 Kitchen have decided to expand their brand to cities all over the country, with a million-pound flagship venue opening in Spinningfields very soon – with more details to be announced soon.

Lystra is no longer involved with 202 – but she and her two silent investors decided to use the site for the launch of their Boujee terrace – which maintains much of the pink interiors of 202 but with even more added bling.

She says: “Obviously here we had 202 first but then I decided I wanted to do my own thing so I’m no longer a part of that. I came up with Boujee because it represents something quite lush and opulent – it’s very me!”

Faux flowers and flamingos are everywhere – and the new toilet area is festooned with pink blooms ready for everyone to get their phones out for more selfies to share on social media.

The crazy interiors are undoubtedly the appeal of the place – creating a full sensory experience as much as an afternoon or evening out – where revellers will come in, order the giant fizzing cocktail trees, dine on the small plates menu and then post lots of envy-enducing photos of it all on Instragram thus enticing more people to book in.

It’s certainly a feast for the eyes – while eyebrows will no doubt be raised by a new slogan cheekily emblazoned on the pink walls outside stating: “where the girls go… the boys will follow”.

There’s a new “kissing booth” photo station, a pink throne, and retro American gas pumps where you can wield a large fuel nozzle to your heart’s content.

And Lystra reveals dazzling plans are underway for the main Boujee restaurant next door, which is in the process of being transformed ready for opening on May 17, when lockdown restrictions are set to be eased to allow indoor hospitality.

Anyone who has visited the Liverpool site can expect a similar level of all-pink interiors, with hanging nude mannequins and a whole row of Barbie boxes for guests to pose in for the all-important Instagram snap.

“We want to move fast, we want to have a Boujee in every city. We are probably looking next to Chester and to London.”

Food at the terrace is a range of small plates and sharing dishes – the likes of pulled lamb flatbread (£12), roasted chilli squash (£10) and pork souvlaki (£11).

It will be no surprise that prosecco is on tap here for £7, shot towers can be ordere for £35, while Lystra’s favourite tipple of Laurent Perrier Rose is served for £100 a bottle with the option of those sparklers in the ice bucket for its arrival at your table for added pizzazz.

There’s even a Lystra’s leading lady cocktail (£16) served in a shapely glass emulating her famous curves – topped with LP Rose of course.

As for 44-year-old Lystra’s next move? Well she’s busily filming on series 13 of the Real Housewives where she says we can expect to see more on her business ventures, and her relationship with 19-year-old daughter Jasmine who is a rising star in the modelling world.

Lystra, who lives in Prestbury, beams: “If lockdown taught my anything it’s to not put anything off anymore.