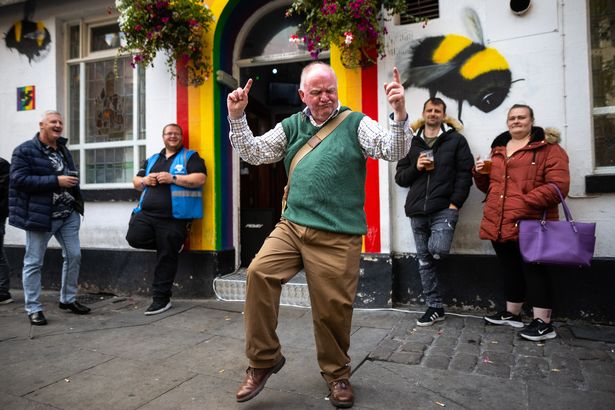 With Pride festivities kicking off on Friday (August 27), Manchester’s Gay Village is already lined with rainbow flags, drag queens, and a sea of people dancing along in the street to camp classics from the likes of Aqua and Samantha Mumba.

For people like Holly, who is from Australia, it is the first time they have ever had the chance to attend a Pride festival.

“I’m new to England so it’s my first time at the village. It’s a lot to take in at first but it’s nice.”

To find out more about what’s happening at Manchester Pride this year, click here

Yasmin is also experiencing Manchester Pride for the first time after moving to the city from Dubai.

“This is my first Pride anywhere – anywhere!,” she says.

“The closest I’ve ever got to this is from watching RuPaul’s Drag Race so it’s unreal to be here and experience it.

“I just landed here two weeks ago. Pride is not legal in Dubai, so it’s amazing to be here.

While people like Holly and Yasmin are enjoying Pride for the first time, there’s also plenty of regulars who are visiting the celebrations for the upteenth time.

Liz Boyd reckons this is her 20th Manchester Pride. She’s with friend Alison O’Neill, from Chadderton, who’s attending Pride for her second time.

What are you most looking forward to about Pride? Have your say in our comments below

“Every time we book hotels and do the full monty,” Liz, who lives in Bury, says.

“It’s just amazing that it’s back. The vibe is such a buzz, it’s way busier than it is normally is on a Friday.

While there is plenty to enjoy, this year’s Pride celebrations do look somewhat different.

Pride organisers announced that the annual Parade through the city centre would not be taking place this year and would instead be replaced by a series of smaller, participant-only ‘Equality marches’.

Friends Liz and Alison say they will miss the parade this year but won’t let it dampen their celebrations.

“We’re a bit disappointed that there’s no parade,” Liz says.

“If they can play football then I don’t see why we can’t party in the streets.

“We’re ready to make a full weekend of it and enjoy ourselves!”

You can also sign up to the M.E.N’s newsletters for the latest news here.