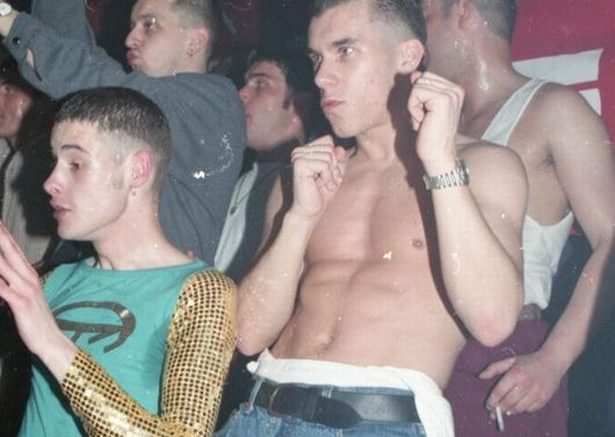 At the start of the lockdown, Stuart Linden Rhodes looked at the items in his attic collecting dust and decided that it was now time to have a proper clear out.

Alongside boxes of knick-knacks and other items, he came across a collection of ring-binders containing thousands of photo negatives.

Those negatives, which had remained untouched for almost 30 years, would prove to be an essential time capsule of the queer nightclub scene in the north as it emerged from out of the shadows and into the spotlight in the 90s.

Stuart discovered pictures of celebrities, some even before they had become famous, and club goers at the likes of Manchester’s Paradise Factory, Manto, and the Hacienda, Garlands in Liverpool and Flamingos in Blackpool.

The photos were taken in the early 90s while Stuart says he essentially lived a double life.

By day, he worked at a college in Harrogate teaching further education (FE) studies, and by night, he was snapping photographs of nightclubbers for gay magazines.

His second career began in 1989 at the age of 32 when, during a trip to Manchester, he picked up a copy of gay zine Scene Out.

He saw they were asking readers to send in a photograph review of where they lived for a chance to win a trip on the Orient Express – and he decided to take part.

“I’ve always had an interest in photography from a young age so I decided to enter the competition,” Stuart, 64, who lives in Harrogate, tells the Manchester Evening News.

“I did a little review of Harrogate and I was the runner-up in the competition and got my article printed.

“I got talking to a friend in Leeds called Terry George at the time and he mentioned he wanted to start a new free gay magazine called All Points North and asked if I’d like to be their scene reporter.

“I thought, why not – it was free nights out and I got to cover the north, from Birmingham to Newcastle, as part of the job.

“My job was to go take photographs and write a review. They weren’t advertorial, it was just as I saw it.”

While his second career was never hidden from his colleagues, Stuart said the role became more frequent and required him to travel across the north on a regular basis.

“It’s not something I could do now – I was young back then and I had the energy to do it!,” he explains.

“I’d finish work in the afternoon, get the cameras dusted off and then head off to Birmingham.

“I’d get home at like four o’clock in the morning, catch a couple hour’s sleep and then be in class for 9AM. I got through the day and then I went to sleep.

“To avoid any conflict at college, I always used my middle name Linden for the photography and review work because I never used that at work so it never clashed.

“Some of my colleagues knew about it, but the students never cottoned on.

“It was just my hobby. Some of them played with train sets in their attic in their spare time, while I went out and had a wild time with celebrities.”

Looking back on the nights he had in the 90s, Stuart says it was a time full of excitement and freedom as queer scenes across the north started to emerge.

“It was exciting, it was a time like no other,” he explains.

“I have been going to Canal Street since 1973 when I was 16 and, of course, that meant I was going there illegally at the time.

“To go from being illegal where you could go to jail to suddenly being able to party in the early hours of the morning with thousands of people was surreal.

“There was a real sense of freedom that came with the 90s where it finally felt like we belonged.

“The hub of the whole gay scene in the north was Manchester. I remember going when it was just Napoleon’s, The Goose and the Rembrandt and then, all of a sudden, there’d be new bars popping up every month.”

Kipping on friend’s sofas or booking nights in rundown hotels, Stuart would go from snapping Paul O’Grady waltzing through Sackville Gardens to capturing David Hoyle all dressed up at the latest club night.

Alongside All Points North, he also ended up working for Gay Times and other publications.

“Pretty much overnight we had all these big club one-nighters start up,” Stuart recalls.

“There was Confetti in Leeds, Peach in Manchester, and then the bigger clubs like Garlands in Liverpool and Paradise Factory and Flesh in Manchester.

“These clubs could hold up to 1,000 people whereas a decade earlier, the clubs we had were holding around 40 people.

“It was the start of the scene changing too. It went from Hi-NRG and disco music to happy-clappy, hip hop, dance and trance.

“You can see the change in the pictures.”

As the scene started to get bigger, so did Stuart’s responsibilities.

He says: “One night I had to do a double-header where I went to Garlands in Liverpool and then had to head to Manchester to cover a club night that didn’t open until 2am – all bearing in mind I had class at 9am.”

The late nights and early mornings eventually started to get to Stuart and, after ten years, he decided it was time to stop.

“My job was always to write about things how I saw it and how I experienced it,” Stuart says.

“I got to the point where I couldn’t go away and write about it anymore because I just wasn’t comfortable and didn’t really agree with the way things were going.

“As the scene got older, so did I, so when it changed, that’s when I decided to jack it in.”

While he carried on working as a teacher, the negatives of Stuart’s photos remained untouched on his bookshelf for 30 years – until last year.

He spent a year digitising each photograph before he began sharing them online via an Instagram page, which now has more than 4,000 followers.

Stuart says that coming across the photographs for the first time in so long was like being transported back in time – he can still remember the events leading up to each photo.

“In those days, it was all 35m film so you could never look back at the photo to see if you’d got a decent shot.

“You took a lot more photos and just hoped you’d caught the moment you were chasing.

“I looked at the photographs and could still remember the club night or the pub where I was at and what happened that night.

“Seeing them again allowed me to relive some of those nights out again and remember some of the interesting people I met – like David Hoyle or the Pet Shop Boys at the Hacienda.

“I got to meet all these brilliant people and see such amazing things. It was a fantastic time.”

Upon discovering his pictures, Stuart soon realised that his negatives were now the only remaining copies that existed of many of the pictures.

“It’s only purely by chance that I kept all the negatives,” he says.

“I’ve reached out to many of the publications I worked for and pretty much all their archives are gone…so, this is it, essentially.”

When Stuart’s Instagram account started to gain popularity, he decided he needed to do more to immortalise his time capsule of photographs and the idea of compiling a book came about.

Edited by producer, director and VICE writer Joe Ingham, the book ‘Out and About With Linden’ is due to be published next year and is currently part of a Kickstarter campaign.

“It’s people’s lives,” he says of the photos.

“People enjoy looking back on time – it’s always fun to look at yourself 30 years in the past, isn’t it?

“What we noticed going through all these photographs was that there were a lot of celebrities that popped up, so we decided to approach them to see if they’d like to comment.

“Once they realised that the pictures wouldn’t harm their career or reputation, they wanted to be a part of it. We’ve got comments in the book from Paul O’Grady, Mel B, Boy George, Angie Brown and Su Pollard – all absolute icons who wrote back to share their memories.

“We’re also including comments from Joe Public who were there at the time or who have struck a chord with the pictures.”

Looking back on the gay scene in the 90s, Stuart says that what stands out to him today is how much of a necessity it was at the time.

“It was the only place you could go out and not get your nose punched,” he explains.

“Back then, I remember Lily Savage would stop her show halfway through to remind people of the importance of safe sex – this was all after the AIDS epidemic.

“The red ribbons were worn all year round, and that doesn’t happen anymore – that’s quite a sad thing.

“There isn’t as much of a stigma and resistance towards gay people as there used to be.

“The gay scene has evolved again and changed a lot in those 30 years since. A lot of younger gay people don’t necessarily need gay bars like we did because they can go to straight bars that openly accept that they are gay.

“Obviously, there is still homophobia and still places where it’s not safe to be gay and that’s why I think gay bars will always be needed, but maybe not in the quantity they were in the 90s.

“The 90s were an exciting time, it was of its time. There was nothing like it back then.”

You can support the Kickstarter campaign and pre-order a copy of the book here.

Another Printworks casualty as massive nightclub closes after 18 months