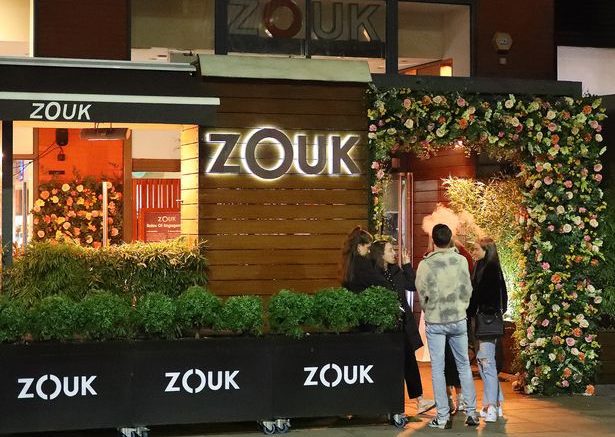 When Eric Bailly chose to celebrate his birthday in style with a whole load of his Manchester United team-mates earlier this month, they beat a well-trodden path to one of Manchester’s most popular footballer haunts. For Eric and his Reds pals including Marcus Rashford, Jadon Sancho and Juan Mata all headed to one of the city’s hidden foodie gems – Zouk Tea Bar and Grill just off Oxford Road.

The luxe Indian restaurant has become something of a hotspot for footballers and visiting superstars over the years. Its more secluded location on the edge of the city has leant itself to become a more private dining spot for some of the most famous faces in the world who’ve dined there – including the likes of music icons Drake and Rihanna.

Indeed Drake was so keen on Zouk’s cheese naan and chilo kebab when he booked out the entire venue on his 2017 visit that staff decided to make them house specials on the menu ever since. But Zouk bosses say they can trace back their starting point as a celebrity hotspot to when one particular footballer started to frequent there.

Back in 2012 when Mario Balotelli was playing for Manchester City, the flamboyant star was to become a regular fixture at Zouk. Even though the restaurant was to find themselves in the midst of a rather amusing bit of tabloid speculation about the star.

Zouk owner Mudassar Amjad said: “It all started with Balotelli when he was at Man City. There was a famous incident where the press wrote that he was spotted sword fighting with our bread chef with a rolling pin.

“The truth is he was a huge fan of the restaurant and came most weeks. He even got fined by his team after being papped coming out of Zouk the evening before a big game!”

But as the restaurant was to find out, where Balotelli leads, other stars were swift to follow.

Mudassar recalls: “Balotelli brought lots of other footballers with him and he also brought Drake. Drake then brought Rihanna and before we knew it we had regulars from City, United, Everton and Liverpool.”

Zouk specialises in authentic Pakistani and Indian cuisine, and is known for its floral walls at the entrance and contemporary interiors in the Quadrangle building on Chester Street. It also boasts a large outdoor covered dining terrace.

Chefs at the restaurant famously offer what it claims to be the ” world’s hottest curry ” each year to celebrate World chilli day, as well as ever-popular curries like chicken makhani and lamb karahi. Although bosses say their most popular dishes tend to be king prawns, salmon and their famous whole roasted chicken.

And what is it that keeps the footballers coming back? Mudassar says: “I think they like the variety. We have really hearty and warming dishes on the menu like biryanis and our lamb shank curry but we also have a lot of grilled dishes and the footballers are generally very healthy eaters.

“Most popular dishes include the king prawns, salmon and whole roasted chicken. Recently they have also been loving the mango salad and our chicken 65.

“When Drake came a few years back he couldn’t get enough of the chilo kebab which is made with tender lamb fillet. And he had it with the cheese naan. Both are really popular dishes and I’m not sure we would ever take them off the menu now.”

Eric’s 28th birthday bash all took place in one of Zouk’s private dining spaces, but there’s always something of a party atmosphere inside the venue.

Indeed, when Birthday boy Bailly was the last to leave at about 11.30pm after his party last week, he was serenaded with a rendition of ‘happy birthday’ by a group of young fans who had waited for him outside the establishment.

Meanwhile stars who have partied there over the years include Strictly Come Dancing couple Gemma Atkinson and Gorka Marquez, Corrie’s Ryan Thomas and his family and most recently music legend Michael Bolton.

Mudassar says: “Another reason I think the stars like Zouk is the atmosphere. You can come in any day of the week and the restaurant is full and buzzing.

“It has a kind of holiday vibe and we try to provide all our guests with a bit of escapism. Plus we have the mezzanine floor which is a great space for groups or parties and offers a bit of privacy but still has the same buzz and ambiance.”

Best restaurants in Manchester for American style food and vibe