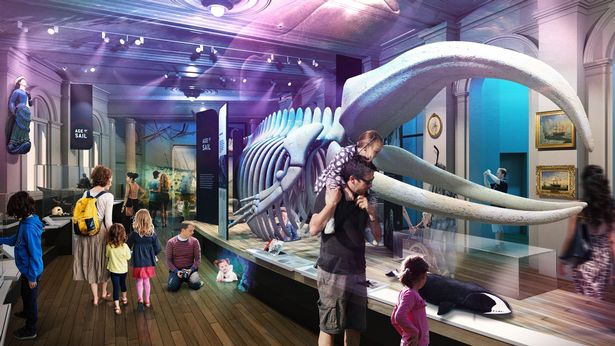 Companies have been invited to be part of a major maritime and regeneration project in Hull.

Businesses will have the opportunity to submit tenders to embark on an extensive refurbishment of one of the most significant buildings in the city.

Hull Maritime Museum and the Dock Office Chambers will form part of the continued regeneration of Hull city centre.

The revamp of the Hull Maritime Museum, will reveal more of its original architecture, create new and improved visitor facilities and the second floor of the building will open to the public as well as access to one the building’s domes. This major refurbishment will also create an interactive and engaging museum, improving the visitor experience.

Plans also include a new and welcoming three storey foyer that will draw people into the heart of the building and central core, providing a visually stunning and thematic introduction to the galleries beyond. This will be created by reopening up the original light well that helped to illuminate the Victorian dock offices. New viewing balconies in this central area will help visitors to orientate themselves within the new galleries and enjoy the splendours of the original architecture like never before.

The Hull: Yorkshire’s Maritime City project, funded by Hull City Council and the National Lottery Heritage Fund, is a key cultural regeneration scheme in the heart of Hull’s city centre that will protect and celebrate 800 years of Hull’s maritime heritage.

Councillor Daren Hale, portfolio holder for economic investment, regeneration, planning, land and property, said: “This is a key milestone in the project as we move forward with another exciting regeneration project in the city. The transformation of key maritime treasures will have a considerable impact on the city centre, its economy as well as attracting additional visitors.

“This significant investment to the much-loved and well known museum and former dock offices will give the city a world-class museum it deserves, right in the heart of its city centre.”

The tender documents are available at www.yortender.co.uk and the deadline for tenders is Monday, September 28.

It follows a call for shipyards to assist with the restoration of the Arctic Corsair and Spurn Lightship.

The building was first opened in 1871, as a result of growing trade and expanding dock facilities.

Christopher G Wray won a design competition, ahead fo 26 others, recognising the  full potential of the unusual triangular plot of land.

In 1867 work began excavating and preparing the site, with the foundation stone laid by William Wright, chairman of Hull Dock Company, on April 20, 1868.

It was officially opened on October 5, 1871, with Lord Mayor of London, the Mayor of Hull and Lord Wenlock, the Lord Lieutenant of the East Riding, in attendance.

Hull City Council gained ownership in the Seventies, with the decision to make it a maritime museum, transferring collections from the old Museum of Fisheries and Shipping in Pickering Park. It first opened in 1975, as Town Docks Museum, with work continuing on its original galleries until 1980.