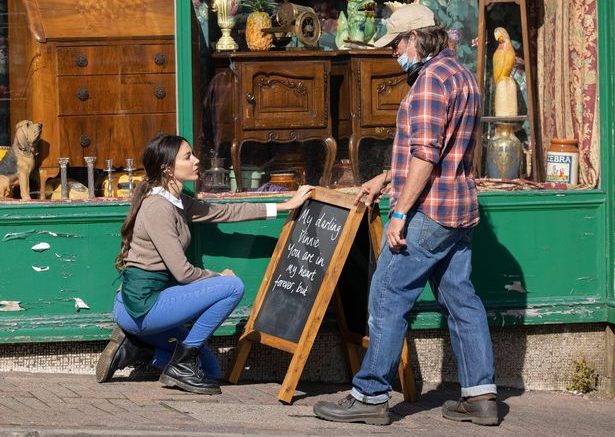 The highly anticipated fourth series of Brassic airs tomorrow, and fans can’t wait to see what Vinnie and the gang get up to next. Michelle Keegan, who plays Eric, revealed on her Instagram stories last week that the comedy would return to screens this September 7.

Originally released in 2019, seasons one to three follow Vinnie and his mates, who haven’t got two pennies to rub together. The broke band of brothers find themselves in a web of petty crime, which often ends in disaster as they wind up in over their heads.

The show – also starring This Is England’s Joe Gilgun, will premiere on Sky Max and streaming service NOW. It’s believed episodes will be launched weekly, with the first seeing the cast ‘hit the road for Ringo and Babs’ Welsh wedding’.

In the final episode of season three, Erin ‘ran away’ with her son Tyler, leaving Vinnie and her friends behind, but it won’t be the last we see of Michelle Keegan in the series. Episode one of season fourth’s description adds: “Vinnie gets wind of Erin’s hiding place and uses the road trip as an excuse to get her back.”

Episode two is set to air on September 14, and reads: “The gang sees a cash cow with a retired racing greyhound, but a mystery begins when the animal finds a human foot during training.”

Brassic was renewed for a second series before its first ever episode even aired. The show is said to have been Sky’s most successful comedy in seven years.

Season three saw a further eight episodes released on October 6, 2021, and season four began filming before season three had even aired, with Michelle Keegan confirming filming had wrapped up in January of this year.

With the new series out tomorrow, it means viewers have got hours to rewatch and recap the comedy-drama – or to watch it from the start if they’ve never seen it before.

You can find out how to stream it below.

How to watch in the UK

The series will air on Sky Max and NOW on September 7, but there are a couple of ways to watch seasons one to three online ahead of the release.

If you’re not a Sky customer you can sign up to NowTV for a seven-day free trial and binge the entire series before your free trial is up. Or you can continue the subscription for £8.99 per month.

Alternatively, it’s also available on Amazon Prime – but you do have to pay per episode to watch – so NOW is definitely the better deal.

Watch Brassic on NOW ahead of season four being released here.