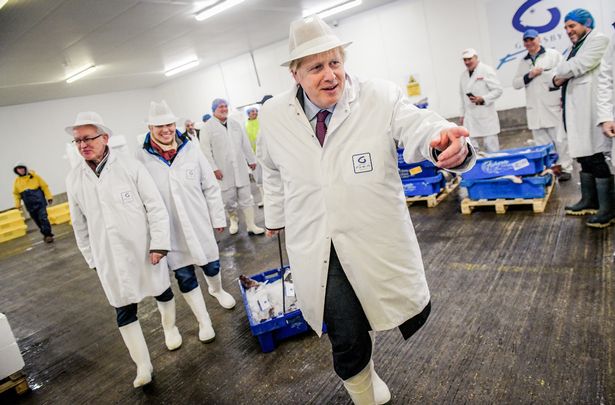 Grimsby MP Lia Nici has told Westminster how her once world-leading constituency is ready to play its part if the UK takes back control of its fishing waters post-Brexit.

Stating how she feels she was elected on the belief in the government to return Great Britain to an independent coastal state – as the Fisheries Bill seeks to bring – she addressed a debate as it makes its way through parliament.

Ms Nici, who brought Prime Minister Boris Johnson to Grimsby Fish Market in the final week of their successful 2019 General Election campaign, said: “The people of Grimsby are under no illusion that we will go back to the glory days of the 1950s where they say you could walk from one side of the dock to the other, on trawlers, and not get your feet wet; what they are looking forward to is to have a new, modern fleet that they can welcome to the port and our local trawler companies of whom I have been speaking to, have said they have the men, they have the trawlers and they are ready to go from the 1st January 2021.”

The bill is currently at the committee stage, with a meeting next week. It had its second reading in the House of Commons this week, following its passage through the Lords.

On her feet in person at the debate, Ms Nici said: “Grimsby has a very long, historic and current link to fishing. I believe it is because of fishing that over 70 per cent of people voted to leave the EU and it was very, very important, in that historic numbers at the last election felt that they were able to support this government to make sure we would leave the EU and get back our fishing waters.

“In the 1950s Great Grimsby was the UK and the world’s premier port. What fishing brought to Grimsby was wealth, investment into the docks, a direct train link to London; that was the power of the fishing industry to us. Unfortunately that industry has been taken away from us – firstly because of the Cod Wars with Iceland that rendered us not being able to fish in Icelandic waters because Iceland wanted to be a sovereign fishing state, and secondly the impact of the Common Fisheries Policy – this enabled foreign trawlers to have more and more power to be able to plunder our fishing waters.

“The CFP is not fit for purpose and we need to make sure we change it so that we are in control of what we want. The CFP really is what tore the heart out of Great Grimsby and for 40 years we have struggled to recover from that.

We are not able to catch in the way that we want. The reason we have had a decimated fishing industry in my town isn’t because we weren’t efficient in catching, and it isn’t because our customers didn’t want to buy fish from us.”

Explaining how if the British public ate one more portion of fish a week, it would be worth £2 billion to the town annually, she added: “We would like to process and fry more British fish but unfortunately we’re not able to catch it at the moment.”

She said EU states, as one, can catch eight times the value of fish in our waters than we can catch in EU waters.

“Think of the power of us being able to have more influence on how, when and where we catch our own fish in our own waters,” she said.

“Our constituents in Grimsby are looking for us to make a change. It was political events and decisions that which people in Grimsby had no power over and no say over, that cut their industry. After 40 years there is ongoing anger and resentment about that but we can change it. We now have the ability to become an independent coastal state.”