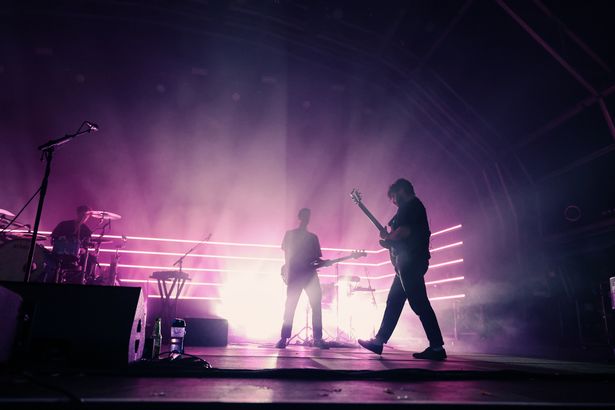 Anyone who has ever been to Castlefield Bowl knows the venue has its own distinct way of showing appreciation to the artist on stage.

No, it isn’t from the masses crammed into the amphitheatre, their admiration is something of a given, but instead it comes from just how many locals you can entice out onto their balconies during a set. Pleasingly for Foals, those properties above Sapporo Teppanyaki were absolutely rocking on Wednesday evening.

Yannis Philippakis and his band came to Manchester for the show, part of the outdoor venue’s summer Sounds of The City gig series, fresh from their Glastonbury set. The band’s Worthy Farm performance, topping the bill at The Other Stage, was one of the highlights of the weekend for many and fans in Manchester were treated to that roster of songs with a few extras thrown in.

Before taking to the stage, there was a last minute change to the evening’s programme which saw Yard Act step in to replace support bands Wet Leg and The Regrettes. Both were unable to play as members were struck down with Covid.

As a late substitution, the hotly-tipped Leeds band Yard Act stepped in seamlessly. Frontman James Smith, who hails from Manchester, certainly embraces the traits of Jarvis Cocker and the better-loved qualities of Morrissey on stage. During their set, the performer paid tribute to the two artists Yard Act replaced.

When Foals later took to the stage, it was an enthralling, fast-paced performance which thrashed through their seven albums. The set was littered with examples of how the Oxford band have continued to evolve over the last 15 years from their youthful indie days.

Newer offerings, from the recently released record Life is Yours, have a dancey pop sound wonderfully fitting for the season. Set opener Wake Me Up, 2am and 2001 could all easily be summer anthems. While the audience, packed with fans adorned in their Foals merchandise, didn’t have to wait long for the heavier stuff. We soon came crashing through Mountain at My Gates.

Foals’ adaptation has seemed effortless and has undoubtedly kept them fresh but there’s no denying My Number will forever be their calling card – just ask those natives on their balconies. That song evoked the biggest reaction of the night and it showed the band’s confidence to get such a big hitter out relatively early.

It is hard to find filler in a Foals set. This combined with the showmanship of lead Yannis Philippakis surely means they can’t be far away from making the Worthy Farm switch across to a Pyramid Stage for a headline slot – they are more than ready.

Addressing the Castlefield Bowl crowd, Yannis said: “I feel like we’ve missed each other – us and you. Manchester are you up for it?” It is fair to say those in attendance certainly were and there was no mistaking Yannis’ enthusiasm.

The frontman, who dedicated Spanish Sahara to last minute additions Yard Act, was headfirst into the crowd’s mosh pits for Foals’ more exuberant numbers and during the encore he climbed the speakers stage right even taking a second to wave to passengers on a train going by.

Yannis had well-and-truly let loose. You sense he would have scaled upwards to those aforementioned balconies, to thank those fans getting a freebie, if he could have.

Everyone, at this point, had long put any inhibitions way to one side as all bounced up and down to the snarling antagonist What Went Down as the set concluded with Two Steps, Twice.

The band said they’d missed Manchester and they gave the city everything it could have wanted, and more, on their return.

ADVERTORIAL: Manchester International Festival returns to the city this week

Which? compared the prices of 47 everyday items and the cheapest supermarket cost less than £75 Manchester Evening News Whats On In …