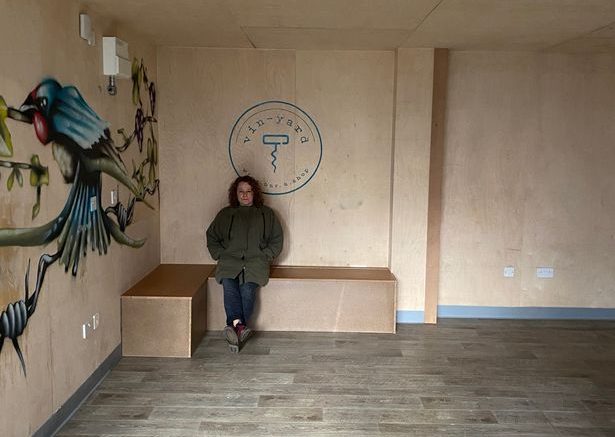 Manchester business owners have been left ‘flabbergasted’ after being served with eviction notices on their bars at Hatch.

The colourful collection of shipping containers just off Oxford Road has been hailed a haven for independent businesses since it was launched by property company Bruntwood in 2018.

But now five of the bar businesses who called the destination home have had their leases terminated ready for Bruntwood to take the running of the spaces ‘in house’.

The move has been described by one ‘fuming’ operator as ‘a real shock’.

Bruntwood has stated that Hatch ‘would not be able to reopen’ without the changes after Covid-19 has created ‘exceptionally challenging conditions’.

The company’s statement also added that the ‘decision to part ways with some of the businesses has been very difficult’ but that it would continue to support those left on site.

Anna Tutton owns Vin-yard wine bar, one of the independent operators left without a site just one month before hospitality begins to reopen from lockdown.

She said in a Facebook post: “It’s still a real shock, but we must finally share the news that we have recently been evicted from our premises at Hatch, along with some of our boozy small business friends, after they (bruntwood) decided to take on running ‘the bars’ for their own profit.

“Having hung with them in solidarity over the past year of (mostly) lockdown, looking forward to a truly memorable Spring/Summer of trading with our independent counterparts & loyal customers who we’ve sorely missed (more than the wine!), we are now abruptly left with little time & little agency as we plan towards our unexpected future.”

Independent bar and microbrewery ÖL, which has been part of Hatch since it launched, will remain operational.

Speaking to the M.E.N., Anna added: “They just said they’d lost too much money in lockdown and that was it.

“You can imagine when they told us, we were all absolutely flabbergasted.

“We only started in June 2019, we spent a good amount of money setting up, and we’ve not fully had a chance to have a go at it really.”

She said she’d decided to speak out so that locals were aware that several bars on the site are no longer being run by independent operators.

She said: “If you choose to go and spend your money there that’s fine, but I don’t want anyone doing it under the illusion that they’re helping out independents, because they’re not.”

Anna is continuing to sell wine for delivery online but says that being ‘made to move out in the middle of a pandemic’ has been ‘terrible’.

She continued: “The timing of it. I did ask if they’d wait and give us the summer so we could look for somewhere not in a lockdown.

“It’s my livelihood. We’ve just been hanging on to reopen, and just as we find out when we can reopen we got kicked out.

“If your site’s not sustainable and you have to do that, then fine, but you should be looking after the people who built it up in the first place.

“We all put our heart and soul into it.

“How much money have they lost that they had to get rid of five peoples’ livelihoods?

“It is what it is, but we’re all pretty fuming about it because I haven’t got anywhere to trade now, just as things are going to reopen.”

Clubhouse, a colourful Tiki bar that only opened in early 2020, confirmed its closure in a post on Facebook, saying ‘Rest in peace, you beautiful box of madness.’

Number 8, which had a popular rooftop terrace, also posted on Facebook to announce ‘with great sadness’ that it wouldn’t be reopening.

A statement from Andrea George, director of town centres and consumer brands at Bruntwood Works, said: “Hatch is a place that is constantly evolving. We set it up to house independent businesses and startups, and create an exciting new destination for Manchester.

“We’re proud to have helped dozens of independent businesses to develop and grow since we started out and this is something that we want to continue to do.

“During the periods of lockdown we have ensured that no traders pay rent but of course the costs of maintaining the site have continued.

“Now, against this backdrop of exceptionally challenging conditions dominated by COVID-19, and in order to secure the future of Hatch, we need to make changes to the configuration of the site and therefore have decided to follow the same model under which many similar venues operate, and keep some of the bars “in house”.

“Without this change to the model Hatch would not be able to reopen.

“This decision to part ways with some of the businesses has been very difficult but has had to happen in order to protect the future of Hatch, and the whole community of traders.

“We started the conversations with those that have been impacted by the decision in January, and we have been working with them since to provide support, including trying to find other sites within the wider portfolio.

“All of the businesses that are impacted are fantastic operators in their own right, and we know they will do great things wherever they go next, whether that be in our portfolio or elsewhere.

“We continue to support all of our brilliant traders on site,including independent bar and microbrewery, Ol; independent coffee shop Takk; 12 independent food traders; 4 independent retailers and a range of independently owned service businesses too – from tattooists to barbers.

“We are looking forward to reopening our doors on 12th April and announcing the arrival of six new independent businesses.”

Wetherspoon announces plans to reopen hundreds of pubs next month