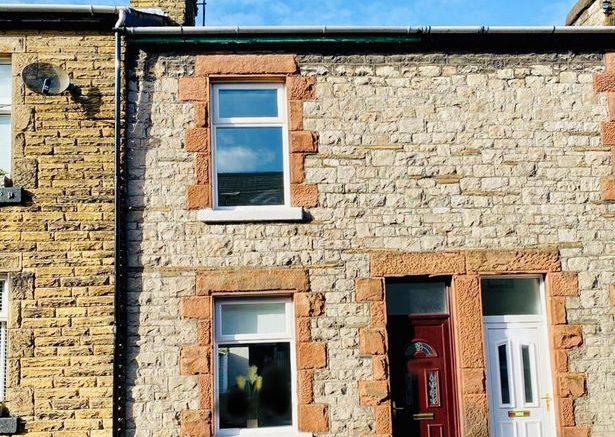 Samantha Wilkinson had only recently given birth to her son when she found out her daughter had Neuroblastoma, a rare form of cancer.

Little Oonagh was just 19 months old when she was transferred to oncology at Manchester Royal Children Children’s hospital for tests, after showing symptoms that her parents assumed was a bug picked up from nursery.

After four months of procedures, tests and scans, as well as surgery to remove two tumours, Samantha and partner Steven learnt their baby girl, the second of their three children, had cancer.

But Samantha says they felt ‘fortunate’ that it was caught so early, meaning Oonagh didn’t have to go through gruelling treatment.

“In February of that year she had surgery to remove both of them and fortunately for her, her cancer was Stage 1 which meant she didn’t need any chemotherapy or radiotherapy,” the mum-of-three told the Manchester Evening News.

“We were really fortunate. So many children who are diagnosed with Neuroblastoma are stage four, high risk and it has terrible survival rates associated with it as well.”

It is so rare the cause is unknown, and affects around 100 children in the UK each year.

Now, Samantha, a stay at home mum, and Steven, a business development manager for a fire protection company, are raffling off their Lake District home in order to start again in the UK.

However, it is more than just a house sale as they are pledging a minimum donation of £40,000 if they can sell all the tickets to Neuroblastoma UK.

“We are thankful for Oognah and part of the reason for doing this is to give back and currently there’s no government funding into childhood cancer research and the pandemic has affected everybody and charities like Neuroblastoma UK who are a small, national charity,” Samantha explained.

“We just wanted to be able to make a big impact with a donation we could raise.”

Samantha says Oonagh became unwell in November 2018 but put it down to her starting nursery and picking up what they thought were typical bugs.

“Oonagh was born in Dubai and we’d come back to England and I’d had a third baby at the end of November,” Samantha explained.

“We had put her into nursery and it was her first winter so she was picking up bugs, which we thought were bugs, and we just put it down to her being at nursery, mixing with new children.

“But it went on for about a month. So she’d get something and then she’d bounce back and then it’d happen again.”

“She was seen by a nurse practitioner first and he said ‘I’m not sure if I can feel something, but while you’re here we’ll just take her up to the children’s ward.”

Samantha says a doctor told her they thought Oonagh’s liver and spleen felt large and that she needed to come back for an ultrasound. But her blood results came back okay.

She was ‘floored’ when a consultant told her they were looking for potential leukaemia.

“I think that is when it hit home they were looking for something more,” Samantha told the M.E.N.

“I was just completely floored by it. In complete and utter shock. They say ‘mother’s intuition’ or a ‘parent’s intuition’ when they think something is wrong with their child but I don’t know.

“For me, yes maybe. But I think on the other hand, we turned up to that appointment to see the doctor to begin with and I just thought they’re going to say there’s nothing wrong with her, she’s just got a tummy bug and I’d be home within ten minutes.

“I think that’s what I really thought was going to happen deep down.”

After an ultrasound the following day, the family were told it was ‘really boring’ and ‘all looked pretty normal’.

“So we had this sense of relief wash over us at that point but they had been looking at the liver and spleen at that point,” Samantha said.

“Then he said we’ll just check her kidneys and that’s when the atmosphere changed in the room so they found something.

“They didn’t use the word tumour, I think they used the word lesion on her left kidney.”

It was then that Oonagh and the family were transferred to Royal Manchester Children’s Hospital and their lives were turned upside down.

“This happened five days before we were due to move to Spain,” Samantha explained.

“We literally had nowhere to live, my husband had just driven our car over with the dog, all the Christmas presents and everything.

“We had a week’s worth of clothes and then he flew back to fly out with me and three children.

“It just sent out lives in a bit of a spin. Turned everything upside down. It wasn’t what we were expecting at all.”

“I had him a month before she was diagnosed. He was poorly when he was born, he was in hospital,” Samantha said.

“He was born with an infection. I had two really good births and his was just awful.

“That in itself was quite traumatic for me because I know I wasn’t a new mum, I had already had two babies, but the trauma of his birth stayed with me as well.”

Following Oonagh’s operation to remove the tumours at the end of February 2019, she went through different MRI scans, nuclear scans, and bone marrow biopsies to make sure it was just those two tumours and that it hadn’t spread to other parts of the body.

Now three, Oonagh has scans and check-ups every three months in Manchester and has now been clear of cancer for two years.

“She absolutely adores her oncologist and talks about him all the time. But she’s so strong and I just think for her age, even now, going for an MRI scan because she’s so little she can’t lay still for 45 minutes so she had that under general aesthetic so in her short life she’s been through so much and she just does it with a smile on her face.

The family did eventually move to Murcia in Spain in June 2019 after originally only planning to spend six months in the UK after leaving Dubai in July 2018.

But plans are set to change again and this is why Samantha and Steven have decided to raffle off their Lake District home.

“We have been here (in Spain) two years now but we have decided that everything that has happened within the last year, we have had other family bereavements in the last year and we have felt like it is time to go home.

“We’ve been overseas for six years so we feel now’s the time, it’s the right time to come home and be with family and friends.”

Samantha continued: “We don’t live in the house because we’re still in Spain but we bought the house, because of everything that happened with Oonagh and we had nowhere to live, we had to try find somewhere to live after she was diagnosed for that interim period.

“They had already told us if she relapsed she’d go straight onto chemotherapy and I didn’t want her to be in that position of not having anywhere to live.

“So we bought the house as a base in the UK for us.”

Despite it sounding like a “crazy idea” to raffle your home, Samantha has said it means much more than that.

“We want to come back to the UK, we need to sell that property in order for us to find somewhere bigger because it is too small.

“It does sound crazy and it’s been a full time job since we started trying to get the word out there but for us, I know some people when they raffle their properties they’re wanting to emigrate and cover costs for that.

“For us, it wasn’t about that. It was just covering the house value and the associated costs with it and then we can make this impact for this charity of a minimum donation of £40,000.”

As well as the house, all legal costs and stamp duty will be covered and the raffle winner will also get £5,000 cash.

“As much as it does sound like a crazy idea, it’s also a really interesting way for people to sell their homes,” Samantha told us.

“I know there’s been house raffles around the UK for the last few years and most of them have been these million pound homes as well which is fantastic if you win it but then you have the upkeep of those houses and those bills become your responsibility the day you sign on that dotted line.”

As for the house itself, it is a stone-fronted terrace in Ulverston, South Lakes, and is valued at £185,000.

The two-bedroom property has recently been fully refurbished making it like a new house inside and would make an ideal home for a couple or small family, a holiday home or rental, or a long term let.

Downstairs is a stunning open plan area with lounge, dining room and a sleek, modern, newly fitted kitchen and upstairs there is a beautiful four piece bathroom, with free standing luxury bath and separate shower.

There are two bedrooms, a large double and a bigger than average single with a large yard area outside.

And for an extra touch of tech, the home has a Google Nest heating system.

Tickets for the raffle are £2.50 and just over 50 per cent of tickets have already been sold.

More information can be found on the Raffall page here or you can like Sam’s Facebook page here.