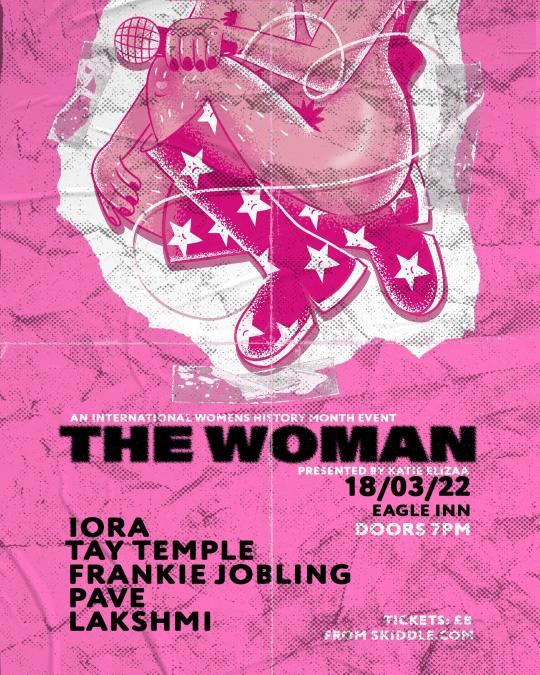 Come and celebrate some of Manchester’s best female talent this International Women’s history month at the Eagle Inn on the 18th March 2022. Presented by Katie Elizaa.

A night to celebrate Women in music.
With performances from….

IORA is an Electronica Pop/folk Artist based in Manchester and has been named as a resident artist at the Roundhouse in London. IORA’s upcoming EP ‘eYes Of a bEAst’ will be coming out in 2020, which also coincides with an Instagram filter designed to interact with. IORA has been supported by PRS emerging artist Fund, as one of Manchester International festival (MIF) Creative 20, selected by Sigrid (on BBC sounds of winner 2018) for a personal Radar playlist, BBC Radio 2’s ‘One to watch 2018’. Other residencies have included working with Beth Orton and Brighter Sound, ‘Soundcamp’ working with Jenna G, Thirty Pound Gentlemen, Werkha and Reform Radio.
IORA has had notable performances playing sold out shows most recently supporting Badly Drawn Boy at the Roundhouse. Other supports include Stealing Sheep as a part of the ‘Rising festival’ at the Roundhouse and then in Liverpool on the final night of their tour. Past performances include Southbank Centre, Festival Square (MIF), Geffrye Museum, Bridgewater Hall, Royal Albert Hall. Festivals include Dot-to-dot, 2000 Trees, ArcTanGent. Radio support has been from BBC Introducing Manchester, BBC Manchester, BBC 6 music, BBC Radio 2, Amazing Radio and Unity Radio.

Manchester based Tay Temple is an alternative folk-rock band, who actively promote self-confidence and self-belief to empower others. Tay is no stranger when it comes to taboo subjects, her second single ‘Ladybird’ depicts how a women’s value is determined by the cruel beauty standards within society. Tay has an emotional, dynamic, yet a powerful voice, which can be heard in every song. Partnered with the band, who bring each song to life with their vibrant instrumentation, Tay’s lyrics are fuelled by her personal struggles, experience of relationships and social consciousness.

Frankie Jobling is a Neo-Soul singer and songwriter, and a founding member of the NEWISM collective (north East Women In Soul Music). After studying music in Manchester, she returned to her native Newcastle and continued honing her sound and unique voice. Influenced by old school soul and jazz titans such as Aretha Franklin and Billie Holiday, Frankie’s sultry R’n’B tones stay true to those roots whilst bringing them into a more contemporary world. Off the back of the successes of her first two singles she has quickly proven herself as an inimitable artist, receiving airplay on BBC Introducing Newcastle and Teeside and performing to sold out audiences. With her debut headliner selling out in one week, Frankie Jobling, “a northern Jorja Smith” with a “liquid gold” voice, is definitely an emerging talent to keep an eye on.

Female fronted, PAVÉ are a A Manchester-based 6-piece alt-rock band.

Lakshmi is a Manchester based singer/songwriter and multi-instrumentalist
with a background in classical music. Along with her band and string trio,
Lakshmi released her debut EP on 1st May 2020, which combines soulful
folk/pop with haunting lyrics and string arrangements. Lakshmi has performed
as a soloist at the Birmingham LG Arena and with the RNCM Session
Orchestra, and was recently named BBC Introducing Artist of the Week for
Hereford and Worcester.

Also trained as a classical violinist, Lakshmi has performed and recorded
extensively as a session violinist and backing vocalist for artists including Ed
Sheeran and Tyler the Creator, Ollie West and the Wildflowers, The Brand
New Heavies, and Garage Classical. Lakshmi draws influence from artists
such as Lianne La Havas, Jorja Smith and Elbow.