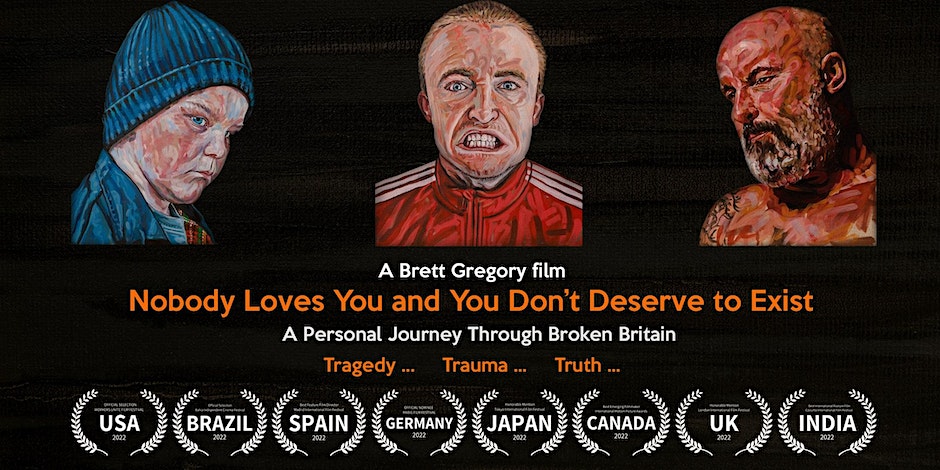 ‘Nobody Loves You and You Don’t Deserve to Exist’ is a multi award-winning independent British feature film written and directed by Manchester filmmaker, Brett Gregory.

This is a unique opportunity to watch a unique feature film on the big screen at a unique venue to celebrate Greater Manchester’s collective inventiveness, industriousness and imagination.

Loosely based on Hieronymus Bosch’s heaven and hell 15th century painting, ‘The Garden of Earthly Delights’, we follow a grieving ex-English teacher, rotting away on welfare benefits, along the canals and crevices of gothic Manchester as he reflects upon the tragic-comic fragments of his shattered past during the 1980s, 1990s and 2020s of Broken Britain.

‘Nobody Loves You and You Don’t Deserve to Exist’ is currently rated 7.6 out of 10 on IMDb and 3.5 out of 5 on Letterboxd and, alongside its soundtrack, it has enjoyed over 100 glowing film reviews from all over the world:

‘Andrew McCrorie-Shand is quite outstanding here. A world class music master class at your doorstep’ – A & R Factory

This screening event is also a fantastic opportunity to meet and network with fellow fans of Manchester’s creative culture to discuss and exchange views, opinions, ideas and contact details.