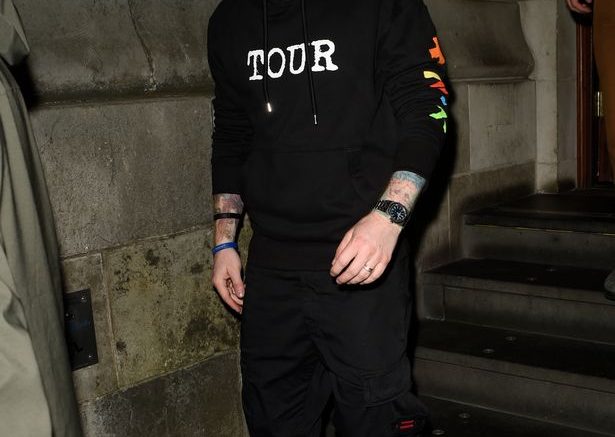 Fresh from entertaining some 240,000 fans in Manchester over the past four nights, pop superstar Ed Sheeran definitely deserved a bit of a treat. And the Bad Habits star dashed from his final show at the Etihad Stadium for a late night Indian meal at one of Manchester’s most-acclaimed restaurants.

Ed was spotted heading to Dishoom on Bridge Street with friends on Sunday night just after 11pm – having finished his show at the Etihad at around 10.30pm. It appears Dishoom stayed open late especially for Ed and his crew, who left just before 1am.

The Indian restaurant is known for its “lovingly created Bombay comfort food” and has won huge acclaim since arriving here in Manchester back in 2018. It is based inside the grade-II listed Manchester Hall, the former freemasons hall on Bridge Street, and is known for it’s super-stylish interiors.

Ed, 31, will have certainly been in need of a refuel after taking on TWO gigs in one day on Sunday. In the afternoon he was at the Capital Summertime Ball at London’s Wembley Stadium, before dashing back to Manchester for the fourth and final night of his Mathematics Tour on Sunday night.

Ed was dressed casually for his Dishoom visit, wearing one of his own “Tour” emblazoned merch hoodies that have been proving popular with fans all week at the gigs. The fashions include the Mathematics symbols that have become synonymous with the tour.

On Ed’s Instagram before walking out at the Etihad Stadium, he said: “Manchester, last show of the weekend it’s going to be a big one.”

After the show in a late night post he said: “Manchester it was real, thank you for coming out for all those nights. I’m going to go to bed, I love you.”

Ed wowed audiences here in Manchester with 60,000 fans on Thursday, Friday, Saturday and Sunday nights at the ground of Manchester City. He wore a black top with the word Manchester in rainbow colours on every night at the Etihad, showing his love for the city.

On Saturday night he was joined at the gig by his footballer pal Wayne Rooney, who posted pictures inside his box at Man City with wife Coleen and a beaming Ed. Wayne captioned the pic saying: ” Ed Sheeran….class as always. Brilliant concert.”

Ed hailed Manchester “the capital of music” during his opening gig, and also told fans of how the first time he played in the city it was to an audience of just one person. He told fans that he was booked to play at the In the City music conference – but everyone left when he came on stage except one person who went on to become his lawyer, he said.

The shows have dazzled fans with the spectacular staging in the round inside the Etihad Stadium. It features a vast web of dazzling light rigs that straddled a central stage and video screens shaped like guitar plectrums.

He performed many of his biggest hits during the shows, including Bad Habits, Shivers, Bloodstream, Galway Girl, Shape of You, Photograph and Castle On the Hill. After the Manchester shows, Ed will get a three day break before his massive world tour continues.

Next up he’ll be heading to Glasgow’s Hampden Park for two nights, before six huge shows at London’s Wembley Stadium. He then heads to Europe for the next leg of his Mathematics Tour.

Get the latest What’s On news – from food and drink to music and nightlife – straight to your inboxwith our daily newsletter.