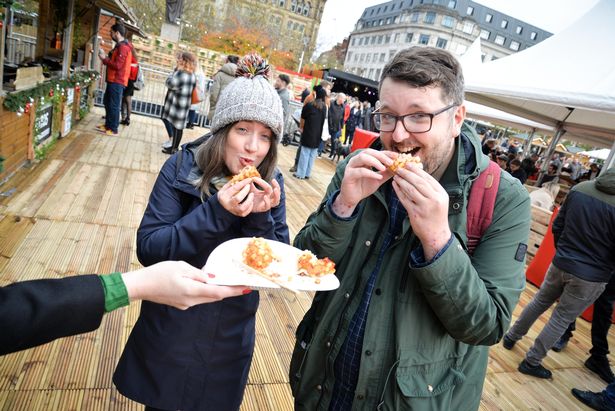 Nothing says Christmas like a massive sausage – or so we were told by our editor as we headed into Manchester city centre to peruse the markets on their opening day.

Bratwurst have featured heavily at the festive markets for decades, but there are now more varieties that ever before.

Intrepid reporters Adam Maidment and Beth Abbit headed out to taste some of the more unusual sausages on offer.

Sugar and sausage – it shouldn’t work but it does.

We were perhaps a little sceptical before tucking into the ‘potato half and half’ (£6) at Crunch Korean, but all worries were put to rest after the first bite of this deep fried carb, meat and sugar combo. It’s like a sausage doughnut.

The sweet chilli sauce, ketchup and honey mustard drizzled on top just added to the disco in our mouths.

“What about that one? It’s only…half a metre long.”

We’ve ambled down to St Ann’s Square to try out a very, very large pork sausage which we tackled sans sauce. That was perhaps an error given the sheer length of this bratwurst.

The sausage itself is nice enough – juicy and substantial.

But the bun – goodness me. If that bread encasing is supposed to contain half a metres worth of sausage they’re dreaming.

Three out of five bratwurst.

This place, famed for their meat-wrapped-in-Yorkshire pudding treats, is always popular. And already very busy at lunchtime on the first day of the markets.

We tried a Jumbo Piggy Wrap (£7) which is a battered sausage in a bacon blanket, drizzled with gravy and caramalised onions and wrapped in a Yorkshire pudding.

This is a handheld Sunday roast for those in need of a seriously substantial lunch. It’s delicious, but be warned, it’s very messy.

We’re three sausages down and it’s time for another. Oh god.

The meat sweats have set in, we’re tired, it’s drizzling. But we rally.

We opt for a pot of currywurst (£6) from the Witch House on New Cathedral Street.

This is sausage in bite-sized form, drizzled with a delicious ketchupey, curry sauce.

In reality we are standing under a canopy in Manchester city centre, but in our hearts we’re standing outside a Berlin dive bar at 3am. Delicious and sustaining.

We tried the Festive dawg (£5). It’s a grilled soy sausage with chili honey glazed onions, ketchup and mustard on a spinach or beetroot bun.

This is probably the nicest of the lot. The buns are soft and pillowy, the hot dog is meaty despite being meatless and the onions are lovely and caramelised.

It’s an oversaturated market but vegan food is not often done this well.