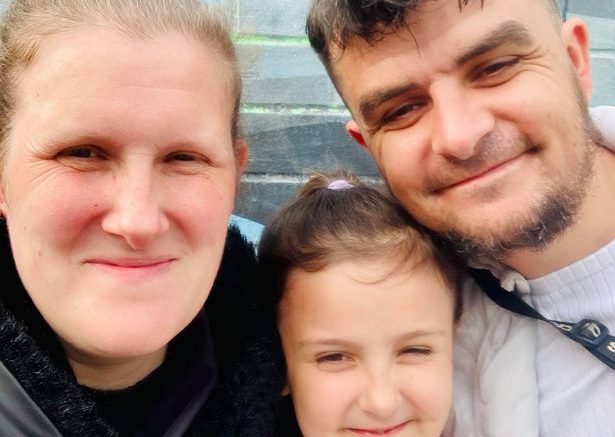 A couple whose son was tragically stillborn are helping other bereaved parents to spend precious time with their babies.

Jenson Doyle was born sleeping at Tameside Hospital in October after mum Claire Relph suffered a placenta abruption when she went into labour at 37 weeks.

The 37-year-old was rushed to hospital but by the time they arrived, there was no heartbeat.

She and partner Marcus Doyle got to spend time with their baby boy on the hospital’s Harebell Suite, which is in the maternity unit and is used by bereaved parents as a private, dedicated room to grieve.

Understandably Marcus didn’t want to leave their side, but while Claire had a hospital bag with her – containing some clothes and toiletries – the 35-year-old had nothing with him for the three days they were there.

That’s why the couple, who live in Audenshaw, are now raising money for care packages for other parents who find themselves in the same position, or spending time with their youngsters on children’s wards.

“Marcus wanted to spend as much time with us as he could and didn’t have a change of clothes or anything with him,” said Claire, also mum to Jordan, 21, Josh, 18, Amelia-rose, seven, Daisy-mae, six and three-year-old Willow.

“This is why we have decided to put these together for other parents so they get to spend as much time together as a family as they can.

“Our midwife Natalie was great and she found little bits for Marcus, but we ended up washing some of his underwear and putting it on the radiator as we had no choice.”

The packages will include toothbrushes and toothpaste, shampoo and shower gels or soap, facecloths, pyjamas, underwear and socks, snacks and a voucher for Costa Coffee.

Claire added: “We are hoping by doing this it will make things a little less stressful and one less thing to worry about. If we can get enough of them together, we’re also hoping to be able to send the care packages to other hospitals including St Mary’s.”

Claire, who works at the Bow Street Cafe in Ashton, says the placenta eruption is on Jenson’s death certificate, but the full circumstances around his death are being investigated.

The loss of her little boy has left a void they’re struggling to fill.

“Losing Jenson had broken us as a family and we have never felt pain like this before,” said Claire. “We talk about him everyday as a family and he’s included in everything we do.

“Our girls talk about him all the time and it was my mum who had to explain to them that their little brother wouldn’t be coming home. Our youngest Willow talks about him when she’s doing role play.

“She came to see him in the hospital and she was singing the Baby Shark song to him so we played that at his funeral. The only bit of peace and comfort I have his knowing Jenson is buried with my dad and not on his own.”

The couple stayed on the suite for three days before Jenson was moved to the hospital’s chapel of rest and then looked after by H Revell and Sons funeral directors, who she says were ‘outstanding, both with us and how they took care of Jenson’.

They have set up a JustGiving page for donations for the care packages and a Precious Little Treasures page on Facebook, where personalised gifts for babies and children are sold to fund the packages and a permanent memorial for Jenson. They’re also working with Ashton-based Finding Rainbows, which offers support to bereaved parents.

Claire, Marcus, their daughter Amelia-rose and a family friend are planning to climb Snowdon in Wales in Jenson’s memory and as another way of boosting the funds.

Advanced Groundwork Supplies in Stockport has offered to buy walking boots and waterproofs for Claire and Amelia-rose, as well as donating toiletries.

Morrisons has also donated towards the boxes, giving supplies of deodorant, toothbrushes and more.

To make a donation, visit the couple’s JustGiving page here. If you can help with the care packages in any way, including providing boxes to put the items in, email Claire at preciouslittletreasures@outlook.com.