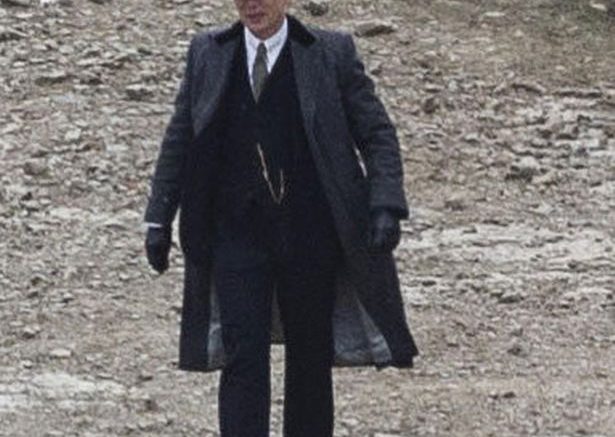 Peaky Blinders star Cilian Murphy has been pictured filming in a quarry near Rochdale.

The 44 -year-old was wearing his character Tommy Shelby’s trademark tweed suit, heavy wool dark coats, penny collar shirt and peaked cap as he walked through the quarry, which is now a popular mountain bike trail.

The site has been transformed into a caravan site from the 1930s.

Murphy can be seen driving up in his vintage car before confronting a group of townsfolk, while appearing to have a gun drawn in his right hand.

Earlier this week, roads in the area were blocked off and signs signalling ‘no entry’ were installed as TV crews arrived.

A series of black tents were all erected in a row with a sign positioned outside reading ‘Caution: Work in progress. Vehicles towing’, and an array of props were set up at the scene, including carts, chairs and tables as well as artificial trees in what appears to be a cemetery.

Trailers also appeared in the area with signs detailing the names of characters, including Tommy Shelby, Arthur Shelby and Duke Shelby.

The BBC period drama, which follows the exploits of the Shelby crime family, is actually set in inter-war-era Birmingham.

But despite this, many scenes have been shot in and around Greater Manchester over the years, from the shoot-out scene on Mangle Street to the political rally outside Stockport Plaza and Tommy Shelby’s home at Arley Hall.

Creator Steven Knight has confirmed that season six will be the final series, but an air date has yet to be confirmed.