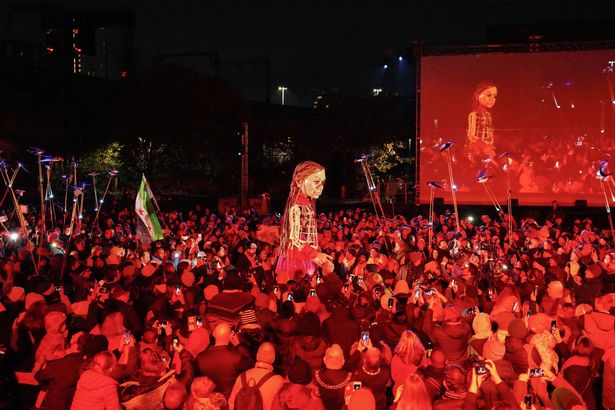 A towering and powerful reminder of a plight endured by millions, a giant puppet of a child refugee fleeing her war-torn country was welcomed ‘home’ to Manchester with open arms tonight.

Little Amal was greeted with cheers and applause – and solemn reflection around all that she stands for.

She’s had a long journey to get here.

And her triumphant homecoming didn’t disappoint, as huge crowds gathered to herald her arrival into Castlefield Bowl in the city centre.

Standing at just over 11ft tall, Little Amal was designed in the image of a nine-year-old girl searching for her lost mother.

She began her 5,000-mile journey to Manchester from the Turkish-Syrian border back in July.

Many thousands of people have cheered her along the way.

Little Amal crossed the Dover Strait late last month, a perilous journey understood to have been made by more than 19,500 people on small boats this year alone.

And in the UK, she’s been to London and this week visited Wigan and Rochdale before arriving in Manchester tonight.

You can sign up very simply by following the instructions here

Ahead of her homecoming, she spent a day with youngsters at Manchester United’s Old Trafford ground – and had a kick-a-bout with Juan Mata.

Crowds chanted ‘refugees are welcome’ as she entered Castlefield Bowl – walking slowly and stopping to greet those out to see her.

She was created as a public art project produced for Good Chance in association with Handspring Puppet Company – famous for creating the horse puppets in War Horse.

A giant flock of puppet birds was released as she arrived in Manchester.

Author and broadcaster Lemn Sissay then read a moving poem, before escorting Little Amal into the bowl.

In a powerful finale, the voice of a woman – Amal’s lost mother – echoed out – and she walked off through smoke to greet her.

One of the main reasons Little Amal finished her journey in Manchester was the Manchester International Festival.

Creative director, Mark Ball, said her final destination was testament to the ‘open-heartedness’ of the area.

“I think it says something about the incredible sense of welcome and open-heartedness that Greater Manchester has always shown,” he said.

“Manchester is a city of 207 mother tongues, incredibly linguistically diverse, been the home to many immigrant communities over the past two-or-three-hundred-years, and it’s a city of refuge.”

Little Amal was built as an exoskeleton from a cane body and carbon fibre head, arms and legs, all controlled by three operators.

Data from the United Nations High Commissioner for Refugees shows 87,449 people have crossed into Europe by the Mediterranean so far this year.

The UNHCR estimates at least 1,299 people are dead or missing.