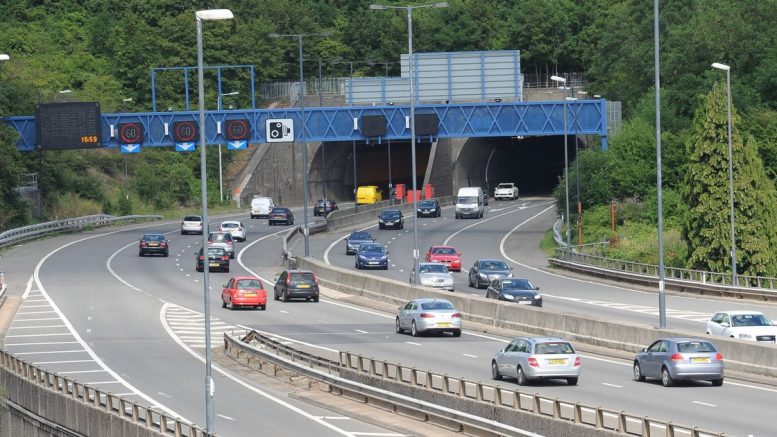 Prime Minister Boris Johnson said his government will deliver an M4 Relief Road in South Wales, despite the matter being a devolved issue.

Last year First Minister Mark Drakeford rejected an independent inspector’s report recommending the building of an M4 Relief Road, at a cost of £1.3bn south of Newport, to address growing congestion levels on the existing motorway, particularly at peak times at the Brynglas Tunnels.

Mr Drakeford rejected the scheme on cost and environmental grounds. A commission set up by Welsh Government, chaired by Lord Terry Burns, is now looking at other interventions to relieve congestion on the ageing stretch of motorway between Newport and Cardiff.

In response to a question from Plaid Cymru MP Liz Saville Roberts, questioning the commitment of Secretary of State for Wales, Simon Hart, to supporting the Welsh economy, Mr Johnson said he would unblock the Brynglas Tunnels with a new relief road.

However, as a devolved matter, it is not clear how the UK Government could deliver such a project, without legislation rowing back the devolved settlement.

Mr Drakeford has consistently said there will be no U-turn on his decision.

At Prime Minister’s Questions, Mr Johnson said:”I have not met anyone who is more bullish about the future of Wales  than the Secretary of State for Wales. That is because this government is absolutely committed to levelling up across the whole of the UK, in Wales and everywhere with investment in infrastructure, education and in technology.

“We will do the things that the Welsh Labour Government, have failed to do, such as unblocking the Brynglas Tunnels and allowing that proper M4 bypass which has long been needed.

“We will provide the Vicks inhaler to the nostrils of the Welsh dragon and get Wales moving.”

Speaking in December Mr Drakeford said: “I’ve made my decision and it is an entirely devolved decision. The Prime Minister has no say in the M4 Relief Road whatsoever. It is not the way the system works.”

If forced upon the Welsh Government he said: “Then you’re talking about very big changes indeed and a Prime Minister that would launch an assault on devolution… the way devolution works is the money comes to the Welsh Government and it is then for the National Assembly of Wales to decide how the money is spent, not for a Prime Minister in London.”